Home / Health / The Benefits and Detriments of Video Games 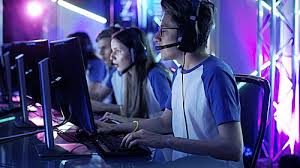 The Benefits and Detriments of Video Games

Video games have long been established as an unhealthy activity, but like anything, moderation is key. While many aspects of video games may cause detriments to health, other evidence reveals that there can be some benefits to health from playing a few hours of video games.

The arguments against video games are pretty commonly known. For example, many musculoskeletal issues may arise from extended hours of play. Pain in the wrists, hands, neck, and back are commonly seen symptoms of playing video games. Some of these symptoms even have specific names, including the Playstation thumb (numbness and blistering of the thumb from constant controller use) and Nintendonitis (tendon injuries in the hands and wrists from Nintendo gameplay). Vision problems are also sometimes attributed to playing too many video games. Sitting too close to the screen may cause eye strain, as the eye is not meant to be exposed to long hours of electronic devices. When playing video games, dehydration of the eyes may also result, as studies show that gamers blink much less while focused on the game. Video games sometimes are also to blame for an increase in obesity. Because physical activity is being replaced by stationary gaming, there is a clear association between increased BMI and playing video games. While these arguments are extremely valid, there may be an upside to enjoying a few hours with a device.

Research shows that some health benefits may arise from playing video games. Benefits to vision have been seen, despite above arguing the opposite. Technological advances have caused controller wires to get longer, so gamers sometimes play from the other side of the room. Therefore, the negatives about exposure to screens are lessened. In addition, playing video games helps with discerning small details and differences in color in the real world, since gamers are forced to look for small changes in the area around them. Those with a lazy eye have also seen improvement in vision because of video games. Also, some studies show that video games can increase physical activities. People who wouldn’t normally exercise may do so in a sports video game, and studies also show that kids playing sports video games are more likely to start playing sports in real life. Another benefit that is seen is that games take the mind off the real world. If high stress is starting to take a toll on daily activities, video games may be able to alleviate that mental pain. Also, playing video games takes the mind off eating, so those seeking weight loss may see video games as a method of curbing food cravings.

The detriments and the benefits of video games are various, so knowing the effects that video games can have on you is essential to well being. Being well-informed about your body is key to keeping a healthy and happy lifestyle.