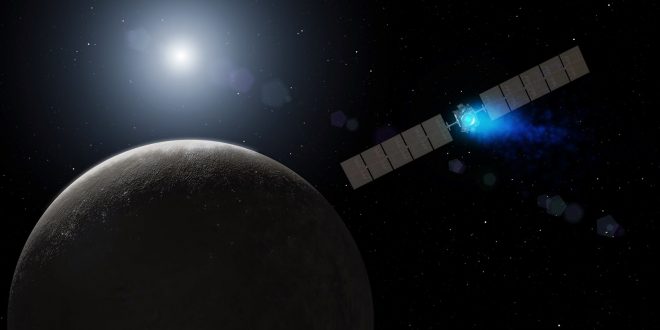 NASA’s Dawn mission will be coming to an end after 11 years of breaking new grounds in planetary science. It will be unable to communicate with Earth in about a month.

These feats are accomplished by an extremely efficient propulsion system, that generates thrust through the expulsion of ions. The engine is not powerful – it would take 4 days to accelerate from 0 to 100km/h. However, the engine is able to sustain this for much longer periods and can reach fast speeds.

Dawn reached Vesta in 2011. After investigating it for 14 months, engineers maneuvered it through the asteroid belt for two years where it has been collecting data from Ceres since 2015.

Ceres and Vesta are the two largest asteroids in the asteroid belt. Ceres is the largest asteroid and it is considered a dwarf planet. The mission chose these two as a target because they have the largest surface area to search, increasing the chance of making a new discovery.

At Vesta, Dawn mapped the surface of the asteroid and discovered that it had experienced more impacts than expected. This suggested that more large astronomical objects existed than scientists previously thought. Dawn also found a mountain on Vesta twice the height of Mt. Everest.

Dawn found bright spots on Ceres’s surface, which happen to be salt deposits composed of mainly sodium carbonate. This finding suggests that Ceres, and other dwarf planets, could have had oceans, and maybe still do. Another thing Dawn discovered were organic molecules in one of Dawn’s craters. Organic molecules are the fundamental components of life, though Dawn’s data is unable to determine whether they were formed from biological processes.

Dawn is now low on hydrazine fuel, a propellant used to change the orientation of its orbit and will soon be unable to orient itself to transmit data back to Earth.

While other probes like Cassini, which was destroyed in Saturn’s atmosphere to prevent the contamination of Saturn’s moons, there is nowhere for Dawn to go, so Dawn will stay in orbit around Ceres. Nasa’s planetary protection guidelines ensure that Ceres will not crash for at least 20 years.