Home / Opinion / Inflation Skyrocketed! Why the Fed was to be Blamed. 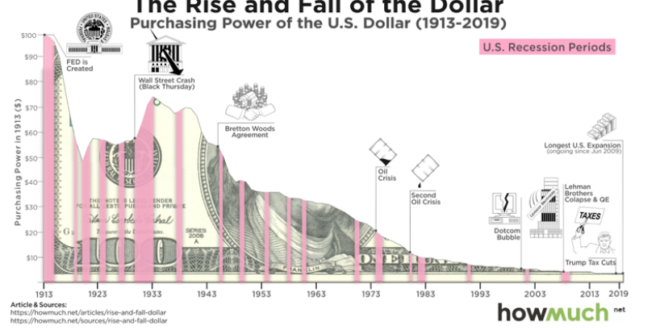 By the emergence and expansion of modern economic interventionism, as the gold standard outlawed and fiat money prevailed, the lack of stable currency and overwhelming state seigniorage have caused inflation and unstable prices to be rampant worldwide. By recent statistics, the US annual inflation rate has desperately accelerated to 7% in the last month of 2021; civilians languished from shrinking wealth and exploited purchasing power caused by inflation and unstable prices.

A fundamental cause for unstable prices is the spontaneous action of the public to raise prices in resisting the exploitation of economic resources through inflation. The state apparatuses in these developing countries are mainly playing the role of exploiters, printing excessive money merely based on fiduciary media is a form of counterfeiting, a way for the state to conduct taxation and redistribution, when the state prints money without commodity basis, the coercive shift in income and wealth took place, the rise of the price of commodities could be interpreted as a desperate method by the public suffered from inflation——trying to recoup its command of economic resources by raising prices as fast as the state printing new money.

On the other hand, the fiat money, according to Ludwig von Mises (1912), was essentially a form of fiduciary media that was not backed by existing commodities; it was the money out of ‘thin air, however representing a certain amount of purchasing power which could be applied on tangible existing commodities. Therefore, the nature of fiat money itself was fraudulent, delivering unveracious messages of prosperity to investors in the market by artificially lowering the market interest rate. For the befuddled investors who only witness the signal of booming, it would inexorably lead to overconsumption and malinvestment and ultimately end in the burst. In Austrian School ABCT theory, it would initiate the business cycle of ‘boom and bust’, consequently making the price and economic situation erratic.

The poignant fact was that America and its people had suffered in the fiat system for nearly a century. Ever since the New Deal, through the 1934 Gold Reserve Act, Roosevelt’s Federal Agency had expanded its monetary authority into the prohibition of private use of gold. Since then, billions of unpacked currency have flooded into the market, laying the foundation for the notorious Big Government, Interventionism, and Welfare State. By issuing the fiat currency, the state, in a disguised form, keeps its infringement on our private property rights.

The Theory of Money and credit, Ludwig von Mises, translated from German to English by H. E. Bateson in The Foundation for Economic Education in 1971. http://web.mit.edu/merolish/Public/books/libertarian/tmc.pdf