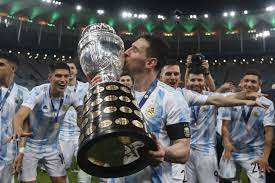 Along with the EUROS were Italy and England will be going head to head, the Copa America tournament came to an end with Argentina taking the trophy in a game exhibited in their home country. A close game of 1-0 lasted for 70 minutes when Di Maria of Argentina scored the only goal of the game. Along with this, there were many beautiful saves by the Argentina goalkeeper Emi Martinez as well as failed goals, the most infamous of the game being Messi’s free goal that he choked. But, nevertheless, he still led the team to victory through his spacemaking, great ball skills, and leadership.

But, it is arguable that the game in itself was not the most tense and anticipated part, but was instead the meeting of Neymar and Messi, both having been great friends and teammates. Their domination in Barcelona ended when Neymar was traded to Paris Saint Germain, and this was the first time meeting in an international game in over 4 years. After the game and much celebrating from Messi, he found his old teammate and had a beautiful reunion.

But what was more anticipated than this meeting, was that this game would solidify Lionel Messi as the greatest soccer player of all time. He had never found success in an International tournament with Argentina, the last major trophy being won in 1993 when the Argentinian legend Diego Maradona had led the team. From then on, Messi had always lived in his shadow and was expected to produce equal results and attain equal glory. This Copa America was probably the most important game for Messi because of this. He had been in three finals with Argentina in the past 10 years. His missed penalty versus Germany in the World Cup lost them that game, and his missed penalty against Chile lost them another. He deserved this win more than any other player or team because despite him being arguably the greatest player of all time, he still had just as much to prove as anyone else.

Messi had solidified his position as the greatest of all time, in my opinion, on that Friday night. He can finally rest knowing that he won for his country.