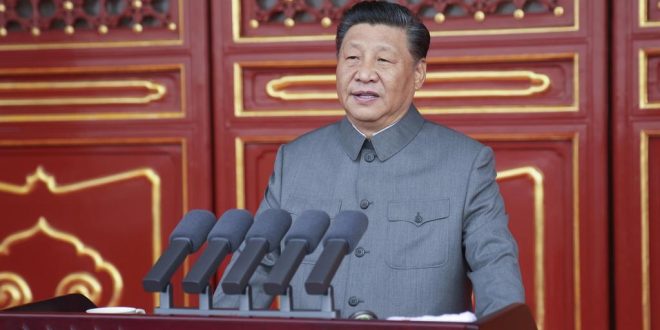 Chinese President Xi Jinping has warned that foreign powers will “get their heads bashed” if they attempt to bully or influence China.

He delivered a defiant speech at an event marking the centenary of the ruling Communist Party on Thursday. Xi also said Beijing would not allow “sanctimonious preaching”, which was a remark seen by many as being directed towards the U.S.

It comes as China faces criticism over alleged human rights abuses and its crackdown in Hong Kong.

Relations between the U.S. and China have strained in recent times over trade, espionage, and the pandemic.

The issue of Taiwan is also a major source of tension. While democratic Taiwan sees itself as a sovereign state, Beijing views the island as a breakaway province.

The US, under its own laws, is required to provide Taiwan with the means to defend itself should Beijing use force to take the island back.

On Thursday, Xi said that China maintains an “unshakeable commitment” to unification with Taiwan. “No one should underestimate the resolve, the will and the ability of the Chinese people to defend their national sovereignty and territorial integrity, he said.

In response, Taiwan said it was determined to defend its sovereignty and democracy. “Beijing should introduce democratic reforms, such as party competition, and respect for human rights while behaving as a responsible regional player,” the island’s Mainland Affairs Council was quoted as saying by the Taiwan News website.

The 100th anniversary celebrations on Thursday morning saw military jet fly-pasts, cannon salutes and patriotic songs played. A carefully vetted crowd were in attendance in Beijing’s Tiananmen Square, many of whom were not wearing masks. The country has seen a media blitz in recent weeks promoting a party-approved version of China’s history.

Hong Kong is also marking its handover anniversary on the same day.

Xi Jinping, who spoke for around an hour, reiterated the role of the party in modern China, saying that it has been central to the country’s growth and that attempts to separate it from the people would fail. “Only socialism can save China, and only socialism with Chinese characteristics can develop China,” he said, referring to the system under which the party embraced markets to reform the economy.

Xi added that “we will never allow anyone to bully, oppress or subjugate China.”

“Anyone who dares try to do that will have their heads bashed bloody against the Great Wall of Steel forged by over 1.4 billion Chinese people.