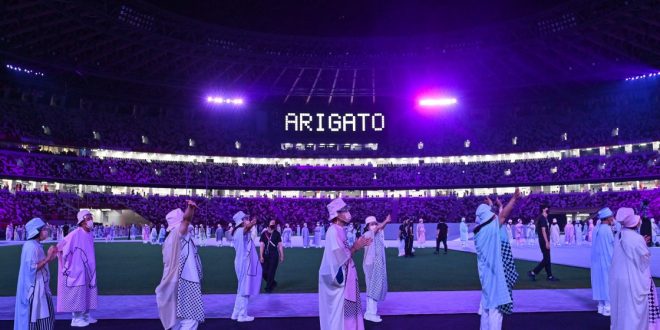 Japan took its Olympic bow on Sunday, passing the baton to Paris after staging a Games that was delayed by the pandemic and doubted by widespread public skepticism but nonetheless was able to deliver its share of memorable moments.

The fast-paced and tightly-scripted closing ceremony kicked off at 8 p.m. Tokyo time, similar to the opening ceremony, was a celebration of sports and Japan. It ended with “arigato”, the Japanese word for “thank you”, displayed on a giant screen as athletes strolled off the field. Just like the opening ceremony, it all played out before thousands of empty seats in the stadium.

In the French capital Paris, crowds gathered to celebrate the handover of the summer games to Paris 2024, dancing and celebrating at the foot of the Eiffel Tower while fighter planes trailing the French tricolor of blue, white, and red smoke swooped through the sky.

“I declare the games of the 32nd Olympiad closed,” Thomas Bach, president of the International Olympic Committee, said as the world said farewell to an Olympic Games like no other.

The Closing ceremony began with one athlete from each participating nation marching in with their flags. Once the athletes were assembled in a circle, the soundtrack quickly transitioned into a jazzy number during which the participants still remaining in Tokyo streamed out to take part in the ceremony, faces covered in masks. The ceremony featured the Tokyo Ska Paradise Orchestra’s performance of “Ode to Joy” and a celebration of Japanese culture.

In a video message to the team posted on Twitter Saturday, President Biden thanked the U.S. athletes “for showing what we can do together as one America and as one team.”

The United States once again led the world with 113 medals as of Sunday morning, including 39 golds, ahead of China and the Russian Olympic Committee on both counts. Japan has made the top five with 58 medals, nearly half of them golds.