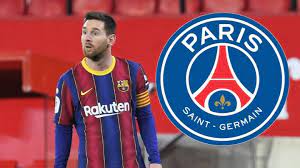 Barcelona witnessed his brilliance at an early age, and despite his growth deficiency, they immediately signed his contract on a paper napkin, not wanting to risk losing this generational talent. The young Lionel Messi walked onto the pitch at age 17, and is now leaving it after 18 years playing for them. He has lead them to 10 LaLiga Santander, five Champions Leagues, and 6 Copa del Reys. His magic and finesse was a spectacle to watch throughout his career, but now many fans will only see him in white and blue as he moves on to PSG for the next two to three years of his career.

On August 8th, Messi walked out onto the stage to address the rumors, and the massive crowd in front of him. It was quite clear from the start, that Barcelon, due to uneven and unfair trade deals, had just lost their legacy player, a once in a lifetime gem. When Messi spoke to the reporters, he immediately broke down. It was not just his team that he was leaving, but his family. Barcelona was Messi’s angel at an early age, giving him the treatment necessary for his growth deficiency. Messi knew he owed so much to the club, and felt that he was abandoning the people that loved him the most. Leo Messi confirmed his exit from FC Barcelona, saying, “I’ve still not come to terms with the reality of leaving this club now and changing my life. We need to accept it and move forward. The time when I made my debut, that was my dream come true and everything that came later was amazing. I will always remember that moment where everything started.”

Messi had tried everything to stay at the club. They were struggling financially so Messi generously offered a 50% pay cut, which could have been upwards of 150 million dollars. In his speech, he addressed that he would be signing to PSG and reuniting with his old friend Neymar for the next few years.

This is the end of Messi’s legacy at the club, but not the end of his legacy as a player. He still has many years of greatness to come and fans from around the world should gather to support him as he plays for his new club.