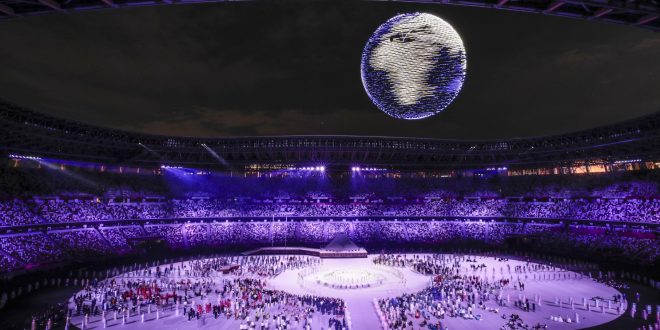 On Friday, July 23rd, the Tokyo Summer Olympics finally opened with a nighttime fireworks and choreography show that occurred in a near-empty stadium, a striking but subdued ceremony that set a striking tone to match a unique pandemic Olympic Games.

As the opening ceremony unfolded, lacking the usual energy from the crowd, the Olympics convened amid largely mixed feelings in the host country of Japan, but organizers hoped that the excitement from the Olympic sports would offset the widespread opposition.

“Today is a moment of hope. Yes, it is very different from what all of us had imagined,” IOC President Thomas Bach said. “But let us cherish this moment because finally we are all here together.”

“This feeling of togetherness — this is the light at the end of the dark tunnel of the pandemic,” he added. Later, Japanese tennis star Naomi Osaka lit the Olympic Cauldron after receiving the Olympic flame from a torch relay through the stadium.

Trepidations throughout Japan have threatened for months to drown out the usual flair of the Olympic opening, and a precisely calibrated ceremony in the stadium after dusk on Friday sought to portray that the Games and their spirit were still burning strong.

Mostly masked athletes waved enthusiastically to rows of empty seats and to a world eager to watch the sports begin but confused about what to make of it all. Some athletes socially distanced, while others clustered in ways completely opposite of what organizers had hoped.

“You had to face great challenges on your Olympic journey,” Bach told the athletes. “Today you are making your Olympic dream come true.”

Organizers held a moment of silence for those who had died in the pandemic; and the sound of the protests could be heard in the distance.

While the Olympic games have undoubtedly begun, people around the world doubt its success as projected by organizers, and wonder if its effect on the pandemic situation in Japan will be worth it.

Previous The EUROS
Next Biomusic: Emotions Expressed through Music