Home / Opinion / The Impact Of DACA 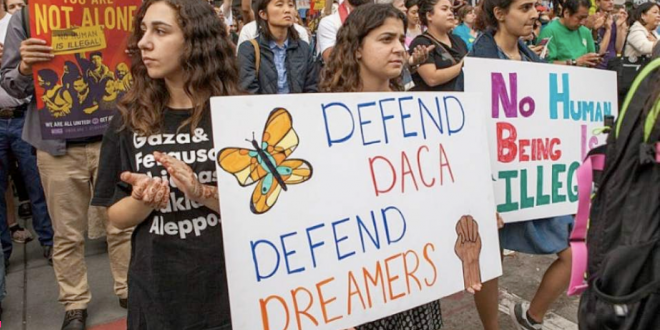 The Impact Of DACA

With the Congressional leaders coming to an agreement on February 7, 2018 regarding the federal government’s budget and the government shutdown ending soon after, there is still much discussion on immigration policies. Notably, DACA (Deferred Action for Childhood Arrivals) is one of the main causes of the controversy around immigration policy and has contributed to a government shutdown from January 20-22 of 2018. This shutdown only ended when the Democrats agreed on a Republican promise to allow debate on the program but would not guarantee that it will remain. As of the second to last week of February, it seems that the DREAM act, the law that established DACA, will most likely be rescinded and may not be replaced with alternative legislation. This is in part due to the fact that Democrats have victories in other areas, including increased funding for education and veterans. Disregarding the politics and focusing on the economics, the benefits of DACA seem to outweigh its potential drawbacks by far.

Since it was passed during the Obama administration in 2012, DACA has allowed around 700,000 young, undocumented immigrants, commonly referred to as Dreamers, temporary relief from deportation in addition to work authorization with the option for renewal after two years. Statistics reveal that the repeal of DACA would decrease GDP by potentially 430 billion dollars, due to the fact that the vast majority of Dreamers are employed, specifically 91% of them as of August 2017. In addition to employment, DACA also has a clear positive impact on wages, with the average hourly wage of survey respondents having risen by 69%, from $10.29 to $17.46. As such, recipients’ average annual earnings have also increased, bolstering tax revenues and promoting economic growth. Overall, the greater purchasing power of DACA recipients lead to a multitude of benefits as both consumer and government spending grows. This would not only lead to general improvement in output and employment but also benefit major industries such as automobile and housing. In 2017, around two thirds of DACA survey respondents reported that they have purchased their first car. Furthermore, 16% purchased their first home with the statistic increasing to 24% for recipients over the age of 25. Since the 2008 recession, immigrants have been crucial to the real estate market’s recovery, and their role in stimulating job creation and new spending in housing only seems to be expanding as demand from children of immigrants will spur the supply of housing.

Although it is reasonable to assume that an influx of immigrants would drive down wages and harm native workers, why does the data for DACA state otherwise? For one, it turns out that the effect of immigration on the labour market depends largely on the skills of the migrants, skills of current workers, and the state of the host economy. Studies in the UK have found that immigration has relatively small effects on the average wage; instead, the effects vary significantly along the wage distribution, or on low, medium, and highly paid workers. For instance, the skills of new migrants are more likely to be substitutes for that of migrants already employed in the host country. As such, the generally low-skilled workers residing in the host nation would face the most negative repercussions on their wages and employment from the influx of new migrants. Even so, the adverse effects in the short run do not hold out in the long run when the demand for labour adjusts in response to the increase in supply. Moreover, looking beyond wages and employment reveals more adjustment mechanisms to immigration: immigration could potentially change the distribution of goods and services produced in the economy and thus the structure of the labor market. An increase in low-skilled workers may lead to an expansion of certain sectors, which in turn boosts demand for these products and brings wages back up. Immigration may also lead to improvement in technology for producing certain goods that then increase the productivity of labor and shifts labor demand as well. Ultimately, the effects of the immigration are not clearly defined and depend largely on the circumstances of each specific situation, such as how well the migrants’ skills complement the host nation’s workers, whether or not the immigrants are generally low-skilled, and if the host country is in an economic downturn.

Bringing the discussion back to DACA, its recipients, who are on average 22 years old, represent a relatively highly skilled, educated portion of immigrants. As such, the legislation does not harm lower-skilled Americans or put a drain on government resources, two key counter arguments against immigration. Instead, because they are both skilled and productive, Dreamers contribute to government programs, including Social Security and Medicare, and enlarge the total domestic economic product, benefiting all Americans. It is unsurprising that repealing DACA and driving out Dreamers has resulted in opposition from not just political and moral perspectives but an academic point of view.

Megan is a senior at The Harker School. She is interested in applied mathematics, computer algorithms, artificial intelligence, cognitive vision science, and economics. Outside of school, she is a tutor and mentor at the Boys and Girls Club of the Peninsula (BGCP), a regular volunteer at Second Harvest Food Bank (SHFB), classical pianist, and an avid figure skater. In her free time, she enjoys exploring hiking trails in the Bay Area and Lake Tahoe, reading science fiction books, WIRED and The New Yorker magazines.
Previous Latest Fashion News
Next Auto Trucks