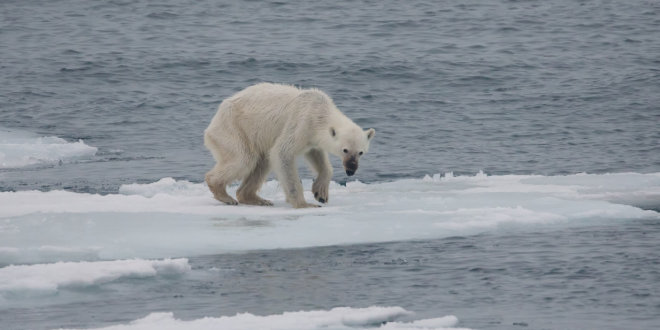 For anyone who has been on social media on the past month, they have seen the video of a starving polar bear. Its bones—hip, back, everything—are jutting out. No muscle or well-rounded figure that a polar bear is famous for. Walking slowly among trash cans, the polar bear desperately looks for food. Only absolute monsters would not feel any sort of emotion. However, the video also raises some important questions. Is the starvation of the polar bear purely due to climate change? Are all polar bears suffering as badly as this one or is it hopefully the only one? According to Paul Nicklen, one of the photographers who shot the polar bear video, the polar bear population on the whole is not in critical danger. He has seen bears in Russia so fat they can barely walk. However, in the past years, there has not been enough resources for any formal surveys to be done. To add to that, polar bears are in remote, icy places, making it even harder for them to be tracked.

Luckily, there is at least one survey done on polar bear starvation by Anthony Pagano, a researcher at UC Santa Cruz. On the sea-ice of Beaufort Sea, he and his team of researchers monitored nine female polar bears by measuring their metabolic rates and tracking them with GPS-camera collars. Unfortunately, the study only gave out a dire result for the polar bears: they were not catching enough food to meet their energy requirement. Their metabolic rates were too fast. To add to that, with disappearing ice, they have to travel longer distances to catch prey, thus increasing their need for energy. As carnivores, they can only hunt for meat; they cannot afford to depend on berries or other plants like other bears.

Disappearing ice also poses another problem for the polar bears: cues to start hunting again. Because temperatures are becoming warmer and warmer in the Arctic, ice is coming back later and later in the fall. For polar bears in these seasonal ice areas, they use ice as a sign to start hunting again. As a result, because they survive on solely fat during the summer months, ‘“they use about two pounds a day waiting for sea ice to come back.’” When they start to go hungry, these polar bears start to go into human settlement areas, foraging for food. The starving polar bear from the viral video probably suffered from this same fate.

Previous Auto Trucks
Next The Allure of Figure Skating