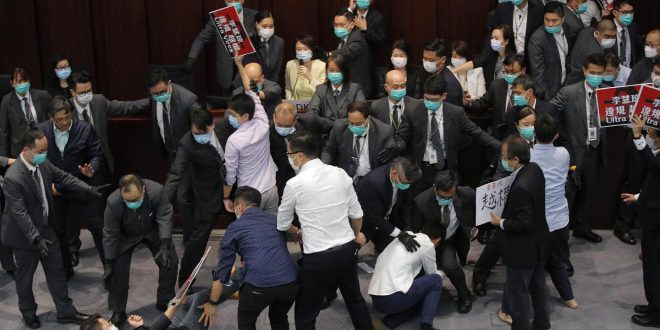 On November 1st, seven pro-democracy lawmakers of the Hong Kong legislature, were arrested over scuffles with pro-beijing lawmakers in the city’s Legislative Council in May.

According to police reports, the seven individuals, made up of six men and one woman, have been charged with contempt and interfering with members of the council. The two opposing sides heckled and shoved at each other over the appointment of the chair of a key committee. None of the pro-beijing lawmakers have been detained or charged.

Such an event can be viewed as the latest in a string of arrests of China critics in Hong Kong, after the national security law was imposed by the Chinese government in June.

The seven arrestees include the Democratic Party’s Wu Chi-wai, Andrew Wan Siu-kin and Helena Wong Pik-wan, and the Labour Party’s Fernando Cheung Chiu-hung and Kwok Wing-kin. Ex-legislators Eddie Chu Hoi-dick and Raymond Chan Chi-chuen were also detained on Sunday morning. The detainees face up to 1 year in prison if they are convicted.

“Some lawmakers dashed towards the security guards surrounding the rostrum and made it impossible for the meeting to go on… Law enforcement action is taken in accordance with law and evidence gathered during the recent police investigation… I wish to reiterate that enforcement action taken on that basis is not about the social status or political background” of those arrested,” police chief inspector Chan Wing-yu told reporters on Sunday.

Many opposition leaders and politicians have questioned why none of the pro-beijing legislators involved in the scuffle have been arrested or detained. The Democratic Party in Hong Kong has described the arrests as arbitrary, and has said that they will not “back down in the face of an authoritarian regime”.