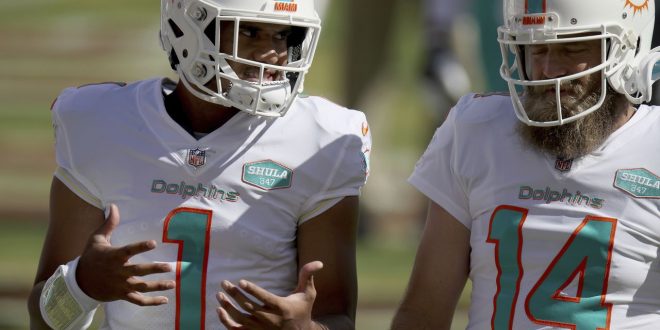 An unexpected turn of events occurred when veteran quarterback Ryan Fitzpatrick was benched for the first round pick Tua Tagovailoa in Miami. He had been playing well in the 2020 season and after he heard the news, said to the press that his “heart just hurt all day.” Now, we are learning that there are some underlying reasons as to why the quarterbacks were switched.

The Dolphins have two picks in the first two rounds, and are eyeing the failure of the Texans because this could land them some great picks. If the Texans do not perform well in the 2020 season, the Dolphins will need to know if Tua is a good choice at QB. If he does not perform up to par, they will have to consider looking at next year’s quarterbacks which include highly rated prospect Trevor Lawrence from Clemson. “We feel like through practice meetings and walk-throughs that he’s ready, and that’s how we’re going moving forward,” Flores said of the move at QB, via ESPN. ” Though the switch was difficult for Fitzpatrick, he was incredibly happy for the up and coming rookie. But, he did have some sad and slightly harsh words for the head coach after saying that he felt like he was being fired from the team. “I was shocked by it. It definitely caught me off guard. It was a hard thing for me to hear yesterday, just kind of digesting the news. My heart just hurt all day. It was heartbreaking for me,” Fitzpatrick said Wednesday. “Flo kind of said what he said and said what he said to you guys as well, and that’s the decision and the direction that the organization is going in.”

We will have to see how Tua does in the next 9 games of the season, possibly bringing the Dolphins to the playoffs.

In week 16 of the NFL season, Dolphins coach Brian Flores made a risky decision by benching Tua Tagovailoa, the rookie quarterback for veteran Ryan Fitzpatrick in the fourth quarter against the raiders. This decision potentially could have ruined the rhythm that the team had with Tua, but with only 10 minutes left in the last quarter, Fitzpatrick walked onto the field when his team was trailing by two points. Many doubted this decision, but immediately took back their words when Fitzpatrick threw arguably the greatest pass of the season. Jason Sanders had grabbed the quarterback’s facemask mid-throw, not only completing the 34-yard pass, but also being awarded a 15 yard penalty for unnecessary roughness, putting the Dolphins in field goal range at the 44 yard line. The game ended 26-25, with the Dolphins clinching the win and ending a season at 11-5. Surprisingly, they did not make it to the playoffs with this record, and Tua still remains the starting quarterback.