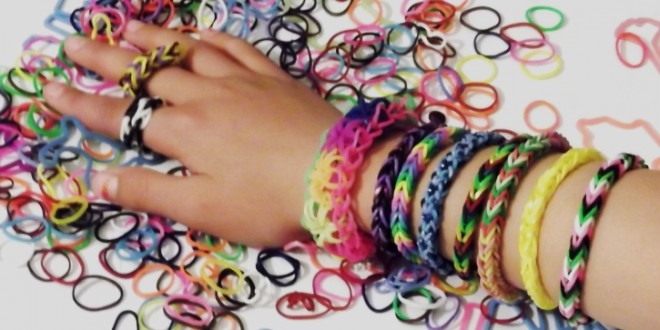 The Success of Rainbow Loom

They started popping up everywhere. The colorful bracelets constructed out of carefully woven rubber bands. Tons of people are wearing them, mostly kids in elementary school, but a few adults too. Publicity is everywhere too; there are video tutorials on YouTube and art blogs, advertisements on billboards, in stores, and on many websites. There is no doubt; these vibrant rubber bands are making its way to forming a new trend.

The Beginning of Rainbow Loom

The original Rainbow Loom was made of scrap wood boards, pushpins, and dental hooks. The inventor, Cheong Choon Ng initially got the idea of the Rainbow Loom when he saw his two daughters, Teresa and Michelle, making bracelets out of rubber bands. Intrigued, Ng started making his own. Because of his larger fingers, Ng created the first loom and used dental hooks to aid him in making the fun accessories. As a family project, Ng and his family created the product that would become the next big trend.

The first obstacle was financial. Due to the low budgets, American manufacturers wouldn’t make the product, so Ng brought the Rainbow Loom to China. There, he spent around 10,000 dollars for the Rainbow Loom kit’s parts and the molding for the template. After the shipment of around 2000 pounds of rubber bands arrived, Ng and his wife assembled the kits. When the profits started coming in, the Rainbow Loom kits were assembled in China and Ng hired a staff of 12 and bought a 7500-square-foot warehouse to handle all the distribution.

In the beginning, no one wanted to buy the product. Ng found out it was mainly because customers didn’t know what to make with the product. To move past that obstacle, Ng and his family made and posted YouTube tutorials on how to make the myriad types of bracelets, rings, and other accessories and purchased Google ads to increase the hype on these kits. During the summer of 2012, the owner of Learning Express Toys, a chain company with 130 franchises, discovered this product and ordered twenty-four of the loom. The company quickly reordered, and soon all 130 stores started selling them. Their key to selling the Rainbow Loom kits was to educate and demonstrate the product to the customers. Simple bracelet designs such as the fishtail and single loop are demonstrated in many stores. In the past few months, the popularity of the Rainbow Loom rocketed. The kit has been listed as one of the top toys of 2013.

Originally made of wood and pushpins, the Rainbow Loom surely has come a long way. Who knew that a bunch of mini rubber bands could become such an excitement for kids? The success of the Rainbow Loom tells us that with perseverance, a simple idea can become the next big thing.