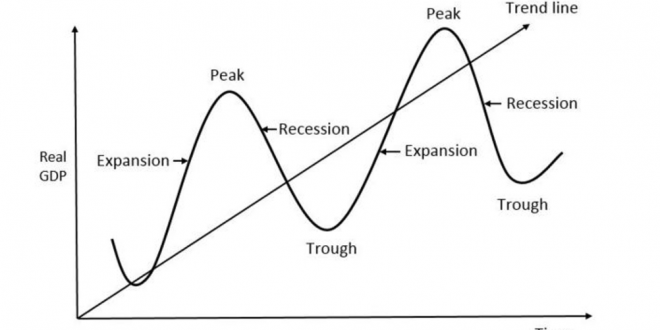 In his first few months as the U.S. president, Mr. Trump has already begun to enact his economic plan with vigor. He has advocated for an expansionary fiscal policy that entails reduced regulations and cutting both corporate and personal income taxes. While these bold actions would benefit both consumers and corporations as well as boost the nation’s GDP through increased spending, these programs may not always be the answer depending on America’s current economic situation. As such, policymakers need to carefully consider where the U.S. stands in the current business cycle and enact laws that sets the nation on a path of steady long-run growth.

For those who may not be familiar with macroeconomics, the business cycle charts the country’s GDP over time, as shown in the featured picture. While the upward sloping straight line represents the nation if it were growing at a steady rate, the repeating wave shows the U.S.’s more realistic trend of growth that varies from booms, periods of rapid growth, and busts, times where the economy is in a recession. Even though booms are periods of greater spending and boosts in GDP, such a high rate of growth is unsustainable and if continued, would eventually result in the other extreme of the business cycle, busts, an extremely low point of the economy characterized by low output and high unemployment. While the exact cause of the business cycle has not been determined, historical examples have confirmed the existence of the trend, the most prominent being the Roaring Twenties, an era of increasing output and consumerism, followed by the intense low of the Great Depression due to a multitude of factors from the stock market crash and income inequality to inept government policy. Regardless of the cause of this phenomenon, the main takeaway from events like the boom in the 1920s and the Great Depression the decade afterwards is that neither booms nor busts are desirable, and the government as well as the Federal Reserve must take action to ensure that the U.S. economy grows steadily rather than experience surges of prosperity and inevitable recessions.

As of now, many believe that the U.S. has not only fully recovered from the devastating financial crisis of 2007-2008 but also is on its way to reaching an unsustainable boom. Thus, the Federal Reserve is beginning to enact contractionary monetary policy that, in effect, contracts the economy through raising interests rates, making it more difficult for investors and consumers to borrow and spend excessively. On the other hand, as mentioned before, Trump intends and has started to implement an expansionary government policy that would stimulate the economy unnecessarily and deviate from the steady rate of growth. While Trump’s expansionary actions are understandable as the public tends to look more favorably at policies that expand the economy, the Trump administration should take the most appropriate course of action not merely based on public opinion or politics but rather through considering whether the economy is growing at the right pace or if the government needs to prevent a boom or bust from occurring.

Megan is a senior at The Harker School. She is interested in applied mathematics, computer algorithms, artificial intelligence, cognitive vision science, and economics. Outside of school, she is a tutor and mentor at the Boys and Girls Club of the Peninsula (BGCP), a regular volunteer at Second Harvest Food Bank (SHFB), classical pianist, and an avid figure skater. In her free time, she enjoys exploring hiking trails in the Bay Area and Lake Tahoe, reading science fiction books, WIRED and The New Yorker magazines.
Previous O.J. Simpson Granted Parole
Next Faster Helicoptors