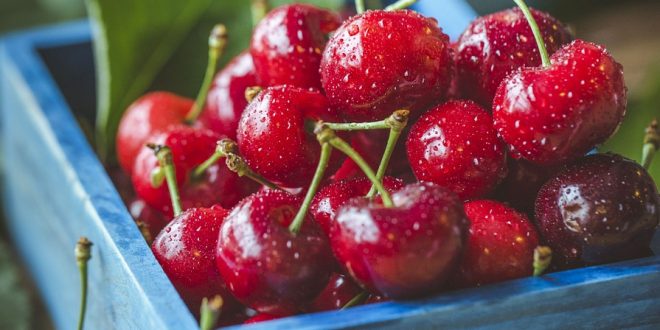 Many people would enjoy a small basket of cherries and agree that they taste great. But when we eat these small red fruits, we reap more benefits than just their taste. Cherries are packed with antioxidants and provide numerous health benefits, helping those who struggle with insomnia, joint pain, and diabetes.

Tart, or sour, cherries can be an effective antidote for jet lag or lack of sleep. When we toss and turn at night, drink some cherry juice. In a study, participants boosted their melatonin intake by following a routine that entails drinking cherry juice 30 minutes after waking up and 30 minutes before each meal. Because cherries are a good source of melatonin, the hormone which helps people regulate their sleeping cycles, they can help deal with severe jet lag. Sour cherries, in addition to regulating sleep, also help alleviate muscle pain. Studies suggest that a cup and a half of tart cherries or one cup of tart cherry juice can reduce muscle inflammation and soreness. In fact, a group of marathon runners who drank tart cherry juice twice daily beginning a week before their race experienced less muscle pain after the race than those who drank another fruit drink.

Cherries, despite their sweet taste, has a greatly reduced effect on blood glucose levels, which can be measured by the glycemic index. Sweet cherries have a low glycemic index of 22 — lower than apricots (57), grapes (46), peaches (42), blueberries (40) or plums (39). As such, cherries are a healthier snack than many other fruits, especially for diabetics.

Strokes are one of the most feared medical emergencies that claim 200,000 lives in the US a year. Tart cherries, luckily, provide cardiovascular benefits. The anthocyanins, which are the pigments giving tart cherries its red color, may activate PPAR, proteins that regulate genes involved in fat and glucose metabolism. In turn, according to a study from the University of Michigan, this reduces the risk of high cholesterol and blood pressure.

By eating cherries, one can lower the risk of gout attacks by 35 percent in a study conducted by Boston University with 633 gout patients. Gout patients who consumed 3 servings of cherries in just 2 days had a 35 percent lower risk of gout attacks, compared to those who did not eat the cherries. He attributes the positive effects to anthocyanins – plant pigments that have powerful antioxidant and anti-inflammatory properties. Though anthocyanins are found in red and purple fruits, including raspberries and blueberries, cherries, especially tart cherries, contain higher levels of these pigments.

Cherries can help prevent the formation of sources of colon cancer, such as harmful chemicals in charred meat. Research found that substances in tart cherries can reduce the levels of carcinogenic chemicals that develop from the charring of hamburgers. When people added tart cherries to ground beef patties, they found that cherry tissue not only slows down the oxidation deterioration of meat lipids, but also substantially reduces the formation of heterocyclic aromatic amines.

As it turns out, cherries have many beneficial, hidden qualities that give people all the more reason to consume these bright red delights.