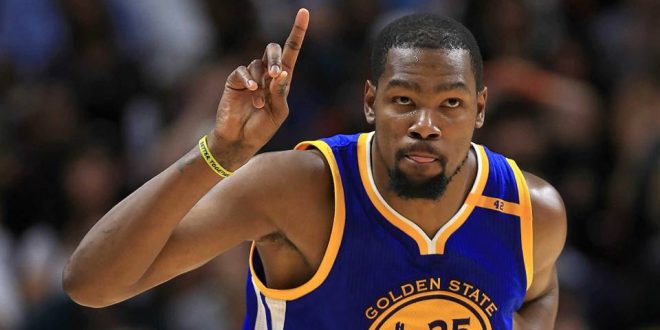 Kevin Durant, forward of the Golden State Warriors and the Most Valuable Player (MVP) in the last NBA playoff, has become an inspiration to many young fans not only for his talents but also for his teamwork. In his recent salary negotiation, Durant extended his team player mentality beyond the court. Along with Steph Curry, another superstar of the Warriors, Durant was eligible for a maximum contract. However, knowing that if both he and Curry opted to take the max contract, the team was likely to lose important players to free agency. Durant demonstrated his exceptional altruism by looking past his personal gain and choosing to accept less favorable terms.

Because of Durant’s selfless actions, the Warriors were able to keep the core of the team intact. Instead of asking for max contract, he made sure that the team re-signed three key players whose contract had ended, forgoing millions of dollars in his new two-year deal with the Warriors to allow the team to stay within salary cap limitation. With this deal, in the upcoming 2017-2018 season, he will get $9.5 million less than what he would get with max contract and $1.54 million less than what he had earned last season.

I believe that Durant’s decision exemplifies his commendable willingness to put his team’s interest above his own, especially when it really matters. If he did not make the sacrifice, the team would lose at least one if not two players who made significant contributions to their success last year. And while some would argue that the Warriors already have enough superstar players, the reality is that for any team to be successful in the highly competitive NBA league, all of the players in the team must contribute and play well with each other. I find it impressive that Kevin Durant is not only aware of the importance of retaining key players for future team success but is also willing to make personal sacrifices to ensure that his team is able to do so.

Ultimately, Durant’s selflessness serves as a paragon of cooperation and teamwork that people should strive to follow. Nowadays, when we often hear news about high-paid professional athletes and owners fighting to maximize their earning in a player lockout or greedy CEOs and bankers taking home millions of dollars bonuses while laying off thousands of low-wage workers, it is rare and refreshing to learn about a role model who is not only exceptionally talented but also possesses humility and remarkable devotion to his team.

Megan is a senior at The Harker School. She is interested in applied mathematics, computer algorithms, artificial intelligence, cognitive vision science, and economics. Outside of school, she is a tutor and mentor at the Boys and Girls Club of the Peninsula (BGCP), a regular volunteer at Second Harvest Food Bank (SHFB), classical pianist, and an avid figure skater. In her free time, she enjoys exploring hiking trails in the Bay Area and Lake Tahoe, reading science fiction books, WIRED and The New Yorker magazines.
Previous The Fires in the West
Next Printing Metal