Home / Global Environment / Homebodies are Better for the Environment 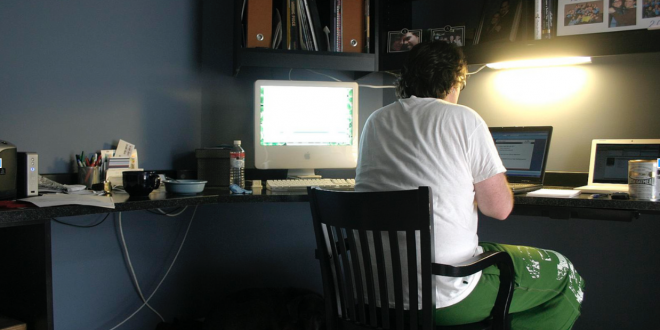 Homebodies are Better for the Environment

Who likes dressing up in a muffin-top inducing pants? No one. Who likes lounging at home in sweats? Everyone. Who likes working at home lounging in sweats? Less people, but that is a definitely preferable choice to wearing uncomfortable uniforms in an equally uncomfortable office. Luckily, the reasons for working at home has just grown: it is better for the environment. According to a study done by University of Texas at Austin and Rochester Institute of Technology, Americans are staying at home eight days more in 2012 than they were in 2003. They were not idle at home either. They would work, watch videos, use the computer, and perform other essential functions. Besides studying this emerging lifestyle, the researchers looked at the impact that it had on the carbon footprint of Americans. According to them, these “homebodies” decreased America’s energy consumption by 1.8% of the 2012 national average, 1,700 million BTU (British Thermal Unit). To fully realize the magnitude of this result: “the amount of energy is approximately equivalent to the state of Kentucky’s total energy consumption in 2015”(Galeon, Dom). A whole entire state’s worth of energy. Think about it. The amount of energy is also equivalent to ‘“30 million cars’ worth of gasoline usage over a year’” (Galeon, Dom).

So, if people are staying at home and increasing the use of computers, why is there a decrease in the use of energy? One theory? The lack of transportation usage. In 2015, in the United States, about 27% of carbon emissions came from cars according to the EPA. Thus, without the need of transportation for the “homebodies”, carbon emissions and energy usage are reduced. So, change out of those uncomfortable clothes and pull up those ultra-soft sweatpants and fuzzy socks!