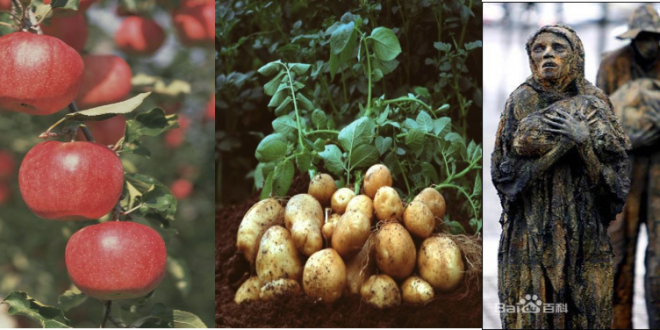 Culture plays an important role in the globalization of apples and potatoes, as people prefer sweet and natural food. In the early 1800s, when Johnny Appleseed brought sweet apples in North America, there was a huge demand for these apples, as people are sensitive to and adore the sweet taste, and crabapple trees produced bitter apples. Therefore, farmers started growing this specific species due to the culture, and sweet apple varieties became globalized. As a result of the Green Revolution, scientists started using GMO technology in potatoes such as the New Leaf potato in order to increase yield and prevent diseases and insects. Nevertheless, after people understood these potatoes are GMOs, they started resisting these trans-gene potatoes because people are afraid of reckless technology and desire natural food. Although many scientists claim that GMO foods do more good than harm, McDonald’s no longer uses GMO potatoes due to public pressure, and less New Leaf potatoes are produced. Cultural factors have a great impact on the globalization of apples and potatoes.

The environment factors also influence the globalization of apples and potatoes. When apples were introduced to North America, they spread so fast because apples can adapt to different environments.As a result, people cultivated more apples as they are stable food sources. Ireland farmers grew only one type of potatoes, the Lumper, as the monoculture, which leads to the globalization of this potatoes. Unfortunately, in 1845, all the potatoes were infected by a type of mold which can cause serious decay, and the adoption of a single breed of potato made the Irish vulnerable. The failure of potato crops caused more than one million Irish people to die of hunger. The potatoes in Ireland were destroyed, and the globalization decreased. The growth of apples and potatoes depends on the environment, which impacts their globalization.