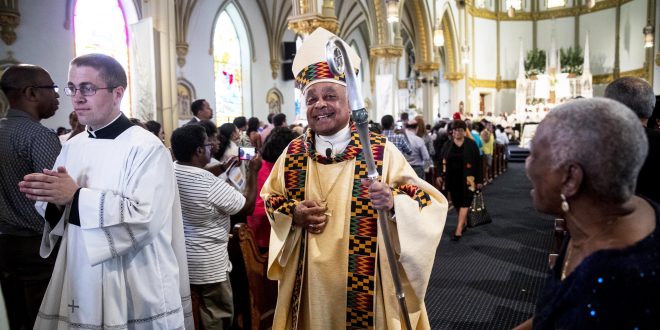 On October 25th, 2020, Pope Francis announced that he will elevate Archbishop Wilton Gregory of Washington to cardinal next month, making him the first African American to hold the title.

Gregory is among the 12 other cardinals in a new class Francis announced, a promotion that comes as he strives to rebuild trust in the Catholic Church which has seen many recent scandals and sexual abuse allegations.

The move was anticipated and not unexpected, since Washington archbishops are typically elevated to cardinal after their appointments, but still symbolic nonetheless in the U.S. Catholic Church, where African American clergy are less represented and few and far between.

According to many of his associates, new cardinal Wilton Gregory is a “caring pastor, a quiet leader and a courageous voice”. Gregory has been one of the most outspoken Catholic leaders in the United States, leading the conference of bishops in the early 2000s. He was the archbishop of Atlanta before coming to Washington.

The Catholic Church has a strong presence and influence in Washington’s Black community. Black Catholics make up around 13 percent of the Washington Archdiocese, which includes D.C. and its Maryland suburbs, compared to 3 percent as a nationwide average.

Gregory has also been striving for racial equality for all people. He was among the Catholic leaders in Maryland this summer who signed a “letter on racial justice”, which documented the Black Catholics in history that have made a significant impact on justice. Gregory has also said that the George Floyd killing is a sign of lingering racism in the United States, and condoned the Trump photo op in front of St. John’s Church, saying that “baffling and reprehensible that any Catholic facility would allow itself to be so egregiously misused and manipulated in a fashion that violates our religious principles, which call us to defend the rights of all people, even those with whom we might disagree”.

However, Gregory has received some pushback from critics and some conservative outlets for his words. Regardless, Gregory is still unprecedented for being the first black cardinal, and will likely work towards greater representation for black Catholics.