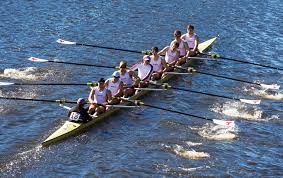 Welcome everyone to the sports column of Tempus Magazine. I am your writer and editor, Allen Bryan. It is my duty to not only give you interesting content on the world of sports, but to also give you the latest news that has occurred. This column will range from small highschool basketball games, to professional sports played around the world. I will be listening to you, the readers, one what you want to me to report on.

With the introduction of the sports column to the Tempus Magazine, our column has felt that it is paramount not only to give attention to the biggest sports throughout the world, but also those that might not get quite as much talk. Here begins our new sports column series: Introduction to ______. First up is one of the oldest sports in existence, rowing.

Rowing hasn’t always been a variation of sport, but instead a means of warfare and transportation. Even in ancient civilizations of Egypt, Greece, and Rome, large crews of up to two hundred men would row in synchrony to move a large ship through rivers and seas as a mode of offensive attack. It wasn’t until the early 18th century that the first rowing races actually occurred, and when Oxford-Cambridge initiated the legendary “Boat Race” in 1829, the modern age of rowing finally began.

Rowing was actually the first organized collegiate sport in the United States, the first race occurring between Yale and Harvard in 1852. International championship races were organized soon after. International races were standardized at 2000 meters, a length that takes between five and eight minutes depending on the size of boat.

There are two main rowing techniques: ‘sweep’ and ‘scull’. Sweep rowing is when a rower holds a single oar, and sculling is when a rower holds two smaller oars, one in each hand. As each rower only holds one oar when doing sweep rowing, there must be an even number of oarsmen per boat. Thus, the three types of competitive sweep rowing are done in 8, 4, and 2-person shells. Competitive sculling is engaged in either a 4, 2, or 1-person shell.

Steering in crew can be done through two means. In many cases, a boat will have a “coxswain” (pronounced cox-in) in the front or the rear, controlling a rudder. Many boats, however, do not have a coxswain, and the steering will be done by the rower in bow or stroke seat using a foot-controlled rudder. While the coxswain does not actually contribute to the physical rowing of the boat, the coxswain becomes very important when it comes to the strategic aspect of rowing which includes steering and mind games.

So, even though one article about rowing won’t teach you every intricacy of the sport, at least you now should have some basic understanding of what competitive rowing looks like. If any of this sounds interesting to you, go online and see whether there are any local rowing clubs near you.