Home / Opinion / The Color of My Skin is Not a Threat 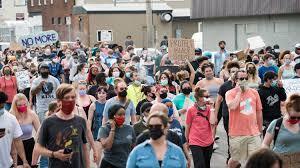 The Color of My Skin is Not a Threat

2020 has been one of the most eventful years in recent history. Two big events have most notably turned the world upside down. In late 2019, COVID-19, a respiratory disease, was discovered in Wuhan, China. This highly infectious disease proceeded to spread like wildfire across the globe, soon being declared a worldwide pandemic by the World Health Organization. At the time of writing, almost seven million people have been infected with COVID-19, and over 400,000 have passed away as a result. The United States has been one of the hardest-hit countries, accounting for approximately 27.7% of global cases and 27.4% of global deaths. Due to the severity of this, mandatory lockdowns have been implemented in every US state. However, there have been many protests started by anti-lockdown supporters. On May 25th, 2020, an African-American man named George Floyd was murdered by a white police officer named Derek Chauvin. Derek Chauvin kneeled on George Floyd’s neck while three other officers watched and Floyd was pleading, “I can’t breathe!” The death of Mr. Floyd has led to many protests across the world in support of the Black Lives Matter Movement.

The anti-lockdown protesters were not met with violent force, even though some were carrying guns that were clearly a threat. At most, they were met with orders to step back and a few stares. However, Black Lives Matter protesters have a different story. It is necessary to acknowledge that the nature of these protests varies, as some are peaceful and others are violent. The anti-lockdown protesters were mostly peaceful, but they did carry guns and could be seen as a threat by yelling in officers’ faces. The Black Lives Matter protests are similarly mostly peaceful protests, but the media has almost exclusively shown the riots and destruction caused by violent protests. Police have tried to control these violent protests using tear gas and rubber bullets, even though tear gas is banned in warfare under the Geneva Convention. For the peaceful protesters, the police have employed some of the same tactics to keep protesters under control. There is a systematic change that needs to occur in the nation’s police force because of the disproportionate response to protesters when they are supporting people of color.