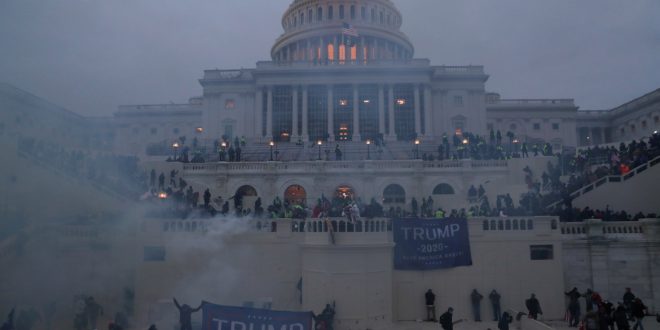 Around 1 p.m. ET on Wednesday, January 6th, 2021, hundreds of pro-Trump protesters pushed through barriers set up around the Capital, where they scuffled with police officers in full riot gear.

Around 90 minutes later, police reports stated that protesters had breached the building, and that the doors to the House and Senate were being locked. Shortly after, the House floor was evacuated by police. Vice President Mike Pence was also evacuated from the building, where he was to perform his role in the counting of electoral votes.

An armed standoff occurred at the House front door at about 3 p.m. Eastern Time, where police officers had firearms directed at a protester who was trying to breach through.

A yet to be identified woman died after being shot in the chest on the Capitol grounds, according to DC police. DC Police Chief Robert Contee also stated that three other people died from medical emergencies during the riot. Multiple officers were also injured.

An insurrection such as what occurred on Wednesday is unprecedented in modern American history. It was the first time that the U.S. Capitol building had been overrun since the British lay siege to Washington D.C. and burned the building during the War of 1812. The scene shocked the nation.

Eventually, in the afternoon, President Trump released a video telling the protestors to “go home”, but it wasn’t before lamenting about the election loss and sympathizing with the rioters.