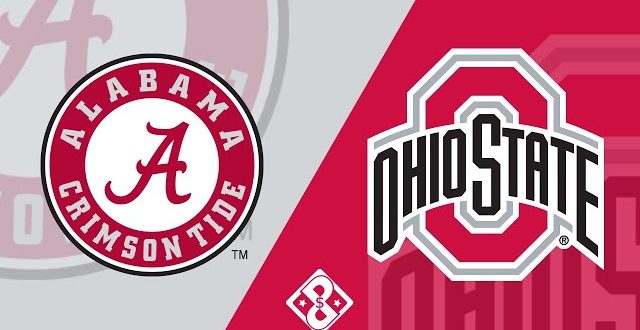 The number one seed Alabama led by Coach Saban are set to clash in Hard Rock Stadium on Monday night in the college football playoff national championship, coincidentally being in the same stadium where the NFL Super Bowl took place last year. This will be one of the most interesting game matchups in recent history, for the Crimson Tide have forced their way into the championship through a tough season, and the Buckeyes only need six games to claim the crown.

Justin Fields, the Ohio state quarterback, exploded the previous week when playing Clemson with 385 passing yards and six touchdowns. He did all of these while suffering a rib injury in the 1st half of the game. Trey Sermon had also rushed for 636 yards and four touchdowns in the last three games alone. Not only has their passing and rushing game been strong, but so has their defense. They put Trevor Lawrence, the candidate for the number 1 pick in the NFL draft, in his place that night, pressuring him from all sides, especially up the middle of the field—a quarterback’s worst nightmare. This week, all eyes have been on Field as he recovers from his rib injury, but coach Ryan Day says that he will be ready for the game. Not only this, but the team has faced some issues with COVID-19, and possibilities of delaying the game until January 18th is not out of the picture.

The recent winner of the Heisman Trophy will lead Alabama, the wide receiver DeVonta Smith. A wide receiver has not been chosen as Heisman winner in over 20 years, so it is clear that he is an incredible player. They played extremely well against Notre Dame the previous week, racking up 8 yards per play with the guidance of offensive coordinator Steve Sarkisian. His ability to use star running back Najee Harris was incredible. Though he is soon to move on to coach in Texas, Nick Saban will not let this distract them from the game.

CBS sports college football experts have already placed their bets, and have made it clear that they believe that Ohio State will win this game outright. They brutally defeated Clemson, especially up the middle, and will prove extremely difficult for the Crimson Tide because they will be missing their star center Landon Dickerson.

Football is soon coming to a close both professionally and collegiately, and these games will truly end the season on a high note.