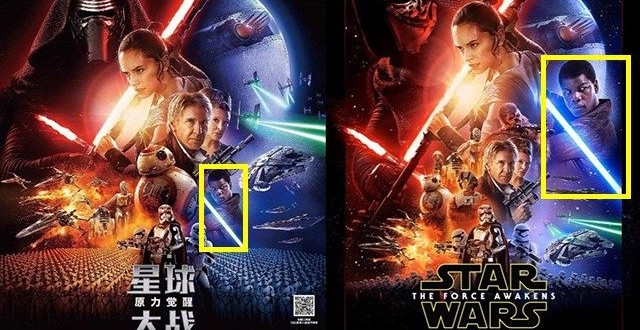 On December 18, 2015, the new sequel of the Star Wars series will be in theatres. Many posters and fan memorabilia have already been released to the public for publicity, but a certain poster has attracted the wrong kind of attention.

A Chinese promotional poster was released, but fans on social media were quick to notice the black lead character was shrunken to the point of invisibility. Many viewed the erasure of John Boyega, the actor, as racist and insensitive.

In China, it seems that more fans were upset over the downsizing of Chewbacca in the poster. Others were simply pleased that actor Harrison Ford was given a larger piece of the poster.

A source close to the Disney marketing campaign said that John Boyega was erased to make room for more “attention-grabbing spaceships and explosions”.

But what does that say about Disney’s opinion of Chinese fans when they believe the erasure of a lead black character as justifiable? What does it say about Chinese fans that ignored or brushed aside Boyega’s erasure?

There are many aspects to consider, but despite what Disney’s intent was, racist or not, it is indisputable that the downsizing of the lead black character is unjust.