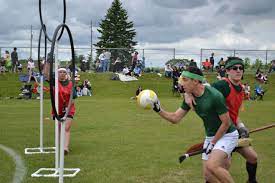 Since it was introduced to the general public in the novel, Harry Potter and the Sorcerer’s Stone (aka Harry Potter and the Philosopher’s Stone), quidditch has invigorated the spirit, if not the bodies, of children, tweens, and teens across the globe. As they grew older, these children wanted to bring the book series and the sport along with them to colleges and universities. Thus, quidditch was brought into reality – with a few modifications.  As originally specified, quidditch is played in three dimensions, while mounted on flying brooms far above the pitch. Since this is, so far, not possible for us muggles (non-magic folk), some changes were required. Never the less, organized quidditch has grown with leaps and bounds.

Let’s go back to the beginning of “non-magical” quidditch, which was adapted from the original by Xander Manshel and Alex Benepe while at Middlebury College in Vermont. The very first match was in October of 2005 and all the kinks of the new sport had yet to be worked out, ergo players were wearing capes made of towels and one rode a lamp instead of a broom. The following year Vassar College creates its own team, allowing for the first intercollegiate match. Even without official sanctioning of by the NCAA, the popularity of quidditch grew on campuses across America and beyond. In 2011, Vassar competed in the first ever transcontinental quidditch match against the University of Vassa, in Finland.  The number of regional tournaments across America grew. By 2013, quidditch matches were being televised and in 2014 the first coaching certification program was implemented. Strangely, South Carolina becomes a quidditch hub, hosting the Quidditch World Cup 7, 8 and 9. In 2017, collegiate and community teams separate into their own divisions. Throughout these years, US Quidditch (USQ) grew “organically”, but in 2019 a restructuring was deemed necessary for the hundreds of employees and affiliated workers and volunteers. Quidditch was now bigtime. To see rules, resources for player membership, info for starting a team, calendar of events, and more, go to https://www.usquidditch.org/.

Covid has hampered quidditch like many other sports, preventing World Cup play in 2020 and 2021. As a niche sport and a relatively young sport, however, quidditch may be more vulnerable to covid than other more entrenched sports. Also, quidditch will be forever linked with the books and the author, J.K. Rowling, that popularized it.  Statements and actions of the author could adversely affect a sport that has largely developed separately from her. As Covid wanes, or becomes more integrated into our lives, we will see if the sport continues with the vigor that characterized its first 15 years. Also, as children move on to other books, will the impetus to run around on a field with a broom between one’s legs still be there?

Is this poert bigger than the autor , jk rowling, who recently stepped in with the transgender community?