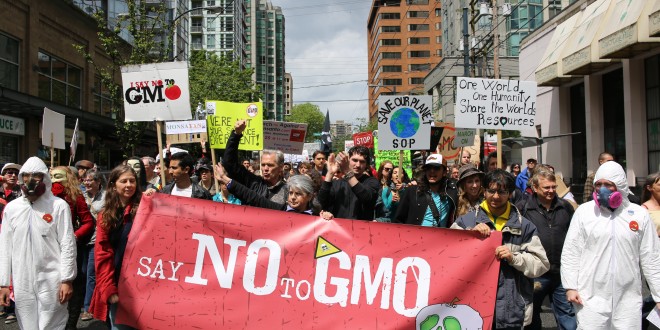 GMOs, like most know, stand for genetically modified organisms, or organisms that have underwent successful gene splicing to express certain traits not originally expressed by the wild-type organism. GMOs are normally found among crops, as modifications can make crops resistant to herbicides and enhanced to provide extra vitamins for places where the majority are nutrient-deficient. “Golden rice”, or rice modified to produce more vitamin A, is one such example.


Though GMOs yield more bountiful and enhanced crops, they come with a plethora of their own problems. The genes of a herbicide-resistant crop can be transferred out of their environment to wild-type, related species, and thus make them into “superweeds”. Superweeds require even more toxic herbicides to eradicate, spurring an increasingly toxic cycle. Much like the race for humans to eradicate bacteria by creating greater antibiotics, the evolution of these plants will reach the point where no toxin could kill them. Though this is not likely to happen in the near future, this is a danger we cannot afford to face. Also, the amount of toxins in the soil from increased herbicide use can put humans in danger as crops take in the poison in the ground. Herbicides do not disappear from your body, but are rather stored in your fat – gradually killing you.


The health of the consumer is another concern. When inserting a gene, a “cassette” is involved to allow gene activation in an environment where factors for gene expression are not present. A “cassette” of promoters, factors, gene markers (such as noncoding strands), and vectors are introduced randomly. Some of these factors can cause toxicity in a normally nontoxic food. Allergens can also be transferred and even created with the insertion of a gene. Mutagens may appear, causing cancer, immunodeficiency, and even nutrient loss.


All GMOs contain antibiotic resistance markers, which are normally used to detect whether the gene of interest was successfully planted. The most common resistance marker is ampicillin resistance. These markers can render antibiotics such as ampicillin useless. As food passes through your digestive system, which hosts millions of bacteria that contribute to digestion, genes can be transferred from the food and into the bacteria, creating antibacterial resistance. This decreases the usefulness of antibiotics, such as the widely-used ampicillin.


From a scientific standpoint, GMOs are a novel path to solve hunger and deficiency problems. However, it could also be the source of many newer problems to come. Very likely in the near future, we as a society will have to come to a decision on the use of GMOs. To make the right choice in what we consume, it is imperative that we educate ourselves fully on the benefits and drawbacks.