Home / Opinion / From Peak to Peak, Through the Valley 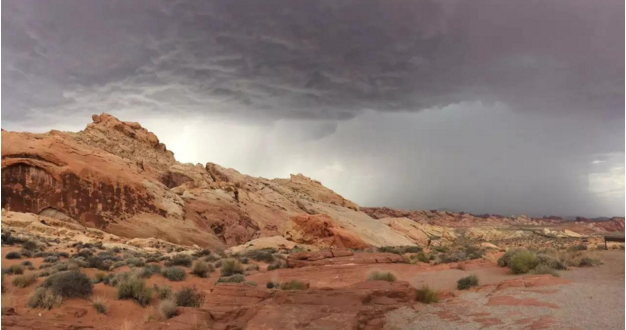 From Peak to Peak, Through the Valley

By Veronica Gong
During times of distress, many lose their composure. They handle the stressful situation poorly and, as a result, blow situations out of proportion. The healthier way of coping, however, is to look on the brighter side and not panic.

Recently, my family and I went on a road trip to the Valley of Fire State Park in Overton, Nevada. The entire day was predicted to have a 30% chance of thunderstorm, and there were ominous rainclouds in the distance, but we forged on ahead. The first hour went splendidly as we snapped picture after picture of the rocks, highlighted by the streams of light peeking through the clouds.

Then, without warning, rain started to fall, pounding more furiously by the second. Although filled with mild trepidation, we did not concern ourselves too much over it. On reaching the next viewpoint, the rain had become considerably heavier, the wind whipping around frantically, rocking our car and pushing us dangerously close to the edge of a cliff. A flood warning was also sent out by the park rangers, cementing our decision of waiting out the storm in a safe spot. By this point, my sister wore a look of intense fear, and the warning only succeeded in pushing her over the brink. Bawling, my sister ranted about how nobody listened to her when she proposed we head back and that this was the end of the world. No matter how much we reassured her that we were on higher ground and that heading back would not only be dangerous, but extremely hazardous, she screamed and raved like a frenzied lunatic for the entire duration of the thunderstorm.

Half an hour later, the storm finally let up. Our first instinct, like everyone else stranded, was to leave, but a river of rainwater had flooded an entire section of the road. Once again, we were all left stranded, this time for fear of being swept away by the rushing water. Fortunately, the ranger arrived, and we were able to leave in just under three hours. My sister soothed herself in this time by taking pictures of the wet rocks, which shone an even darker shade of red than before.

Afterward, as we were leaving the park, we paused to marvel at the magnificence of the natural wonder. The striking red rock formations contrasted stunningly with the setting afternoon sun, framed by a post-storm blue sky. As my sister took more pictures, I was amazed at the drastic improvement in her behavior compared to just hours before. She laughed joyfully now, basking in the receding light. Although her coping technique was less than reasonable, she had recovered with surprising resiliency.

In coping with certain circumstances, it is imperative to keep a clear head and act accordingly. As quoted in a popular quote found on social media, it is important to “be strong, because things will get better. It may be stormy now, but it never rains forever”. The only thing keeping the insanity at bay is the knowledge that every cloud has a silver lining.

Previous Art
Next Swatting Becoming Illegal in all 50 States