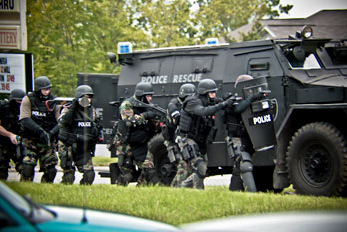 Swatting Becoming Illegal in all 50 States

You call the cops and tell them that there is a hostage situation at another person’s home. The emergency department immediately sends the SWAT team armed with loaded assault rifles, flash-bang grenades, riot shields, and what do they find? An 18 year old in an undershirt and boxers playing Call of Duty.

Surprise, you just “swatted” that poor, innocent 18-year old kid. This is a prank especially targeted at gamers who broadcast themselves live (called “live-streamers”) to others while they play in order to embarrass and make an entertainment show out of it.

Swatting is a big waste of resources and can endanger the lives of many people who have done nothing wrong, and can also hurt other family members in the house. Pets, especially, are endangered when their owner gets swatted.

Here is a video showing how “live-streamers” get swatted: https://www.youtube.com/watch?v=TiW-BVPCbZk

Anti-swatting bills are being put into place in states like California and New Jersey. Rep. Katherine Clark is trying to settle the issue federally, with the national bill called the Interstate Swatting Hoax Act that would ban the act of “false communications with the intent to cause an emergency response.”

From the text of the bill:

Whoever, with the intent to cause an emergency response by any law enforcement agency, in the absence of circumstances requiring such a response, uses a telecommunications system, the mails or any other facility of interstate or foreign commerce to knowingly transmit false or misleading information indicating that conduct has taken, is taking or will take place that may reasonably be believed to constitute a violation of any state or federal criminal law, or endanger public health or safety, shall —

1. if an emergency response results, be fined under this title or imprisoned not more than 5 years or both

2. if serious bodily injury (as defined in section 1365) results, be fined under this title or imprisoned not more than 20 years or both

3. if death results, be fined under this title or imprisoned for any number of years or for life or both; and

4. in any other case, be fined under this title or imprisoned not more than 1 year or both.

This bill proposes that swatting will get you jail time regardless of what happens during the process of the SWAT team invading the house.

“Perpetrators of these hoaxes purposefully use our emergency responders to harm their victims,” Clark said in the official announcement of the new legislation. “These false reports are dangerous and costly and have resulted in serious injury to victims and law enforcement. It is time to update our laws to appropriately address this crime.”

Written by Matthew Gao on 2 January 2016

Previous From Peak to Peak, Through the Valley
Next New Year Resolutions