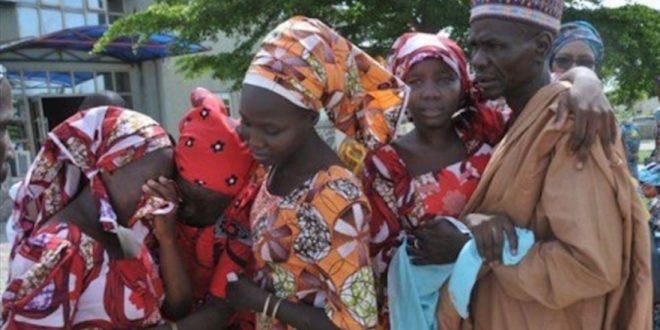 On Saturday, May 20, 2017, after more than three years in captivity, 82 of the Chibok schoolgirls currently between the ages of 18 and 21 were reunited with their families amid tears, laughter, music, and dancing on this emotional day in the Nigerian capital city, Abuja. The girls who were reunited with their families on Saturday were part of a recent exchange brokered by the Nigerian government with the help of the Swiss government, the Red Cross, and other organizations. An initial group of 21 school girls who were released in October 2016 were also reunited with their schoolmates on Saturday.

These 82 school girls were part of the 276 schoolgirls that were captured in April 2014 from their school by the Boko Haram militant group, which later pledged allegiance to ISIS in 2015. The abduction prompted international outrage and the Bring Back Our Girls campaign. Soon after their capture, 57 schoolgirls managed to escape the militants. Two others were found by the army. Another girl was found in May 2016 when she wandered out of the Nigerian forest asking for help. Despite the celebratory atmosphere, 113 of the Chibok girls are still being held by the terrorist group.

Instead of going back to their remote, rural Chibok homes, these 82 schoolgirls will remain in the care of the government for medical and psychological evaluation as well as military debriefings, followed by a rehabilitation and reintegration program. They will be joined by the 24 former captives who already live at the government facility. Highly controversial and confusing to the girls’ families, the Nigerian government maintains that these are security precautions to protect the girls from the stigma, ostracism, and discrimination commonly faced by those returning from Boko Haram’s captivity.

Roger is a junior at Carlmont High School in Belmont, California. Roger serves as an officer of Help Everyone and Remember to Share (HEARTS) non-profit. Roger founded the first California Business Professionals Association (BPA) club at his high school and is active in other STEM related clubs. Outside of his busy school schedule, Roger practices karate, plays saxophone, reads, and volunteers for several worthy social causes in the US and China. Roger is extremely honored to serve as the News Column editor for the Rising Star Magazine.
Previous BOOM
Next Ringling Bros. Shuts Down After 146 Years