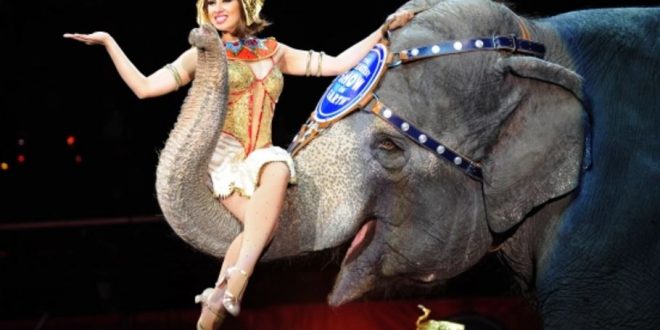 Ringling Bros. Shuts Down After 146 Years

On Sunday night, May 21, 2017, the Ringling Bros. and Barnum & Bailey Circus received its final standing ovation as it performed its last show held at the Nassau County Coliseum in Uniondale, New York, about 30 miles (48 kilometers) east of New York City. It was an emotional 2.5 hours for those who worked on the circus and who watched the final show.

Dubbed as “The Greatest Show on Earth”, the Ringling Bros. circus was once a mainstay of entertainment in small towns and big cities across the country since 1919. Ringling had two touring circuses this season, one of which ended its run earlier this month in Providence, Rhode Island. That show was the more traditional, three-ring circus, while the one performing this weekend had a narrative storyline. Called “Out of This World”, it was set in a futuristic outer space.

A majority of Ringling’s employees are second, third, and even fourth-generation circus performers. Many met their spouses while touring. All spent months on the road each year, traveling from city to city in Ringling’s train cars and describing themselves as a giant family. Like the employees, Ringling fans watched the shows for generations, and they too felt like family. It was the fans’ immense love of the animal shows that led to the circus’ eventual demise.

Many animal welfare and animal rights organizations are opposed to the use of wild animals in circuses. Many of these groups actively campaign against circuses by staging protests outside of venues over alleged animal rights violations. The groups argue that animals used in the circus are subjected to cruel and inhumane treatment during training, harsh conditions during transport, and a general lack of mental and physical stimulation.

In May 2016, Ringling Bros. removed elephants from its shows, but ticket sales continued to decline. It seemed people didn’t want to see a circus without elephants. Ringling’s parent company, Feld Entertainment, announced in January 2017 it would close the show, citing declining attendance and high operating costs.

Roger is a junior at Carlmont High School in Belmont, California. Roger serves as an officer of Help Everyone and Remember to Share (HEARTS) non-profit. Roger founded the first California Business Professionals Association (BPA) club at his high school and is active in other STEM related clubs. Outside of his busy school schedule, Roger practices karate, plays saxophone, reads, and volunteers for several worthy social causes in the US and China. Roger is extremely honored to serve as the News Column editor for the Rising Star Magazine.
Previous Freed Chibok Girls United with Families
Next Space and our Bodies: Space Radiation