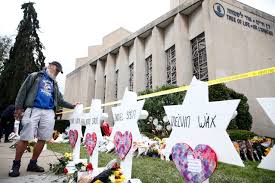 The deadly shooting attack at a synagogue in Poway on Saturday underscores concerns about rising incidents of anti-Jewish hate across the nation. Authorities have not provided many details about the alleged shooter. But the mayor of Poway said the attack, which killed one person and left three others wounded, appears to be motivated by hate.

Shortly after fleeing, Earnest called 911 to report the shooting, San Diego Police Chief David Nisleit said. When an officer reached him on a roadway, “the suspect pulled over, jumped out of his car with his hands up and was immediately taken into custody,” Nisleit said.

The sheriff said a girl and two men, including the rabbi, were wounded as the Jewish congregation gathered for Passover, a weeklong commemoration of the deliverance of the ancient Hebrews from slavery in Egypt. The three were in stable condition at hospitals.

In response, President Trump said: “At this moment it looks like a hate crime. But my deepest sympathies to all of those affected. And we’ll get to the bottom of it.”

The incident comes six months after a man with a history of posting anti-Semitic and anti-immigrant social media messages opened fire at a temple in Pittsburgh, killing 11 people and wounding six more. National Jewish groups, many whose leaders heard about the attack hours after it happened because they were observing the Sabbath and last day of Passover, were mourning.

“This shooting is a reminder of the enduring virulence of anti-Semitism,” said the president and chief executive of the Anti-Defamation League, Jonathan Greenblatt, in a statement. “It must serve as a call to action for us as a society to deal once and for all with this hate. People of all faiths should not have to live in fear of going to their house of worship. From Charleston to Pittsburgh to Oak Creek and from Christchurch to Sri Lanka, and now Poway, we need to say ‘enough is enough.’ Our leaders need to stand united against hate and address it both on social media and in our communities.”