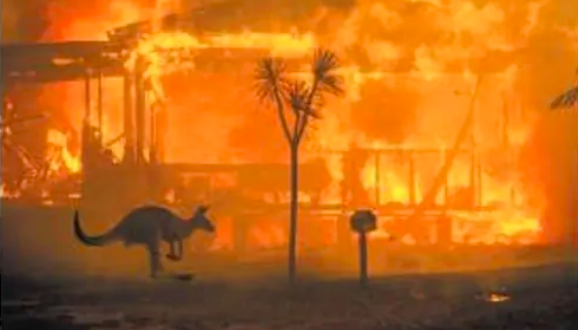 Bushfires in Australia are Ravaging Residents

Australian bushfires have been terrorizing residents as over 1,000 residences and millions of acres have been lost to the raging fires. Unfortunately, wildfires are becoming more and more common as climate change has grown steadily, leaving people and animals without shelter. This is one of many frightening scenes that belong to an array of natural disasters such as severe hurricanes, floods, and rising sea levels, not to mention the sunken islands just off the coast of the city of Perth in Australia. Climate change has drastically affected local residents in Australia and has been devastating to homeowners across the continent. As a response, Prime Minister Scott Marrow visited one of the residencies and was met with a mob of angry residents scolding Marrow for vacationing in Hawaii while the fires burned his country. They asked for more funding to the RFS (Rural Fire Service) to compensate for the many homes lost to the blaze. The prime minister left without a response. Marrow still doubts the climate crisis along with US President Donald Trump, but does acknowledge that climate change could be the cause of the recent bushfires that have spread across Australia. The worldwide community of climate scientists reports that these events are clear evidence that the climate crisis is afoot and needs to be addressed across all countries. Prime Minister calls the reduced carbon emissions “reckless” and is still doubting that Australia needs more to combat the climate crisis.