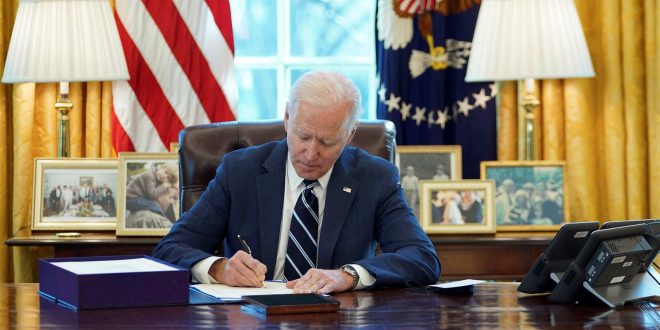 Signing into law another Covid relief bill was one of Biden’s top priorities early in his administration term. He will also give an address on Thursday to lay out his plans for how the country will proceed in fighting the virus a year after the World Health Organization declared COVID-19 as a pandemic.

The plan is to send direct payments of up to $1,400 to most Americans, with direct deposits being able to be received by American bank accounts as soon as this weekend, according to White House press secretary Jen Psaki.

The bill will also extend an unemployment insurance boost that provides $300 per week until September 6th and expand the child tax credit for a year. Additionally, $20 billion will be provided into Covid-19 vaccinations, $25 billion into rental and utility assistance, and $350 billion into state, local, and tribal relief.

“This historic legislation is about rebuilding the backbone of this country,” Biden said before signing the legislation. “And giving people in this nation, working people, middle-class folks, the people who built this country, a fighting chance.”

Democrats in Congress passed the bill without a Republican vote through the budget reconciliation process. The House approved the bill on Wednesday.

Whilst Democrats are calling the bill necessary in order to sustain the economic recovery and help heal the American economy, which has been slowed by economic restrictions for over a year, they have been met with fire from Republicans, who say that the proposal is unfit for the moment and the funding is not needed to fight the pandemic.

“The American people already built a parade that’s been marching toward victory,” Senate Minority Leader Mitch McConnell, R-Ky., said on Thursday. “Democrats just want to sprint to the front of that parade and claim credit.”

Previous NFC West: The Most Difficult Division in the NFL
Next 3D Printing Clay