Home / Sports / NFC West: The Most Difficult Division in the NFL 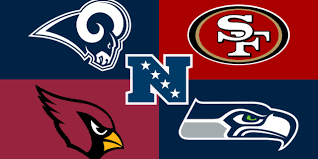 NFC West: The Most Difficult Division in the NFL

The 2020 NFL season has gone by, and many new developments are surfacing, especially in the NFC West. With just a few changes over the past 2 years, the west has now become arguably the most difficult division to play in.

The Seahawks got back into the picture two years ago when they drafted D.K. Metcalf out of Ole’ Miss. This decision sparked the offense, ultimately sending them to the semifinals. Despite their offense being incredibly good, their defense has its issues. The core defense as well as its safeties are having trouble making plays against other offenses. But, this offseason will clear a few things up for the team. Rumors of their star quarterback Russell Wilson are still up in the air and no one knows what will really happen.

The Rams have made some incredible changes to their coaching staff as well as their players. Sean Mcvay was hired as head coach of the Rams just 3 years ago. Since then, he has made drastic changes to the team that took them to a Super Bowl. With the trading for Jalen Ramsey from the Jaguars, and the building up of Aaron Donald, they have both been able to lead the Ram’s defence to become the number one defence in all of the NFL. That’s especially true when accounting for the signing of Cam Akers, who is proving to be a stellar running back, as well as signing Mathew Stafford from the Lions. Getting rid of Jared Goff as quarterback not only saved a lot of money, but created room to bring in more skill with Mathew Stafford, who can hopefully lead the team to another Super Bowl.

The Cardinals have quickly cultivated an entirely new and improved culture to their system. Kyler Murray, who was drafted just two years ago, won the Rookie of the Year Award, and is still proving to be one of the best players from his draft class. Not only this, but the Cardinals traded for Deandre Hopkins from the Texans, an absolute steal for the Cardinals. He is arguably the best receiver in the league currently. If you thought things couldn’t get any better than this, former teammate of Hopkins, JJ Watt, is now reunited with his friend. JJ Watt is not only a leader, but one of the best defensive linemen in NFL history.

The 49ers went to the Super Bowl just a year ago. They lost to the Chiefs who were led by Patrick Mahomes. The 2020 season carried on that bad luck with almost half the starters coming down with big injuries. George Kittle the star tight end as well as Jimmy Garrapolo, their quarterback had to sit out for most of the season, causing the team to struggle. But, this new year is starting to look like a comeback for them. With all their players healthy as well as early 1st round picks, they look like they will bounce back and be Super Bowl contenders once more.