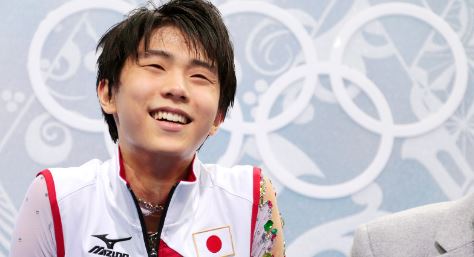 Best Skater in the World

I am not a sporty person, and my Saturday nights are certainly not used for watching sports games. But when the Olympics comes along, I have to watch something. Although it’s hard for me to enjoy every sport, I must admit I adore watching figure skating! My fascination started off with women-only figure skating programs. They looked so elegant on ice. Then it transitioned to pair-skating, where there’s a man and a woman. I love how they just flow with each other on ice. When they skate together, it looks as if they’re one.

A few months ago, I discovered men’s ice skating. I didn’t expect men to ice skate if they weren’t skating with a lady. However, I immediately fell in love. I can’t remember which skater’s video I saw on Youtube first, but I was reading through the comments and I was shocked because the top comments were, “he isn’t even comparable to Yuzuru,” “Yuzuru could have fallen five times during his program and still scored better than him,” and “no one compares to Yuzuru.” It was my first time watching a men’s single ice skating program, and I thought he was fantastic. I didn’t know who this Yuzuru was, and I didn’t understand why people were so mean to the other ice skater. And so, of course, I had to look up who Yuzuru was.

Best decision of my life (maybe).

I spent the rest of the day binging on Yuzuru Hanyu’s skating videos, and rewatched them throughout the month. I honestly have to agree with those comments. Other skaters seem too focused on technique and their programs. Their scores are based highly on the design of their programs, but for Yuzuru, all of his performances are near perfect, if not flawless. The way he even glides on ice sets him apart from other skaters. You can tell that he’s enjoying each and every second of his performance. Like the comments said, “he was just born to be on ice.” Even if you don’t understand ice skating at all, you can appreciate him because he is one with the ice, like a dolphin in the water. Yuzuru takes ice skating to the next level. Even when he “messes up,” and the broadcaster says, “tsk tsk he’s jumped too low. He won’t be able to complete the jump,” he still completes it perfectly without affecting his performance. Viewers are always amazed at what he can do.

Yuzuru Hanyu broke the men’s figure skating short program record in the Winter Olympics, along with many other records in various competitions. I love all his programs, but my favorite would have to be his program at the Sochi Winter Olympics. He looked so free and elegant on the ice that it made me want to skate with him. I also found out that he has asthma, so doing sports is really hard, but he still followed his dream and made it to where he is now. I really look up to him for his persistence. Yuzuru has a never-ending list of achievements, and each one is well deserved. People all over the world have come to a consensus that it’ll be almost impossible for anyone else to break his records.

In his competitions, he is also very courteous to his competitors and is very grateful for all his support. He has an adorable smile, and if you do watch his videos, you’ll see that he really really likes Winnie the Pooh (like me)! Talented, persistent, courteous, and adorable…What’s not to love about the best skater in the world?