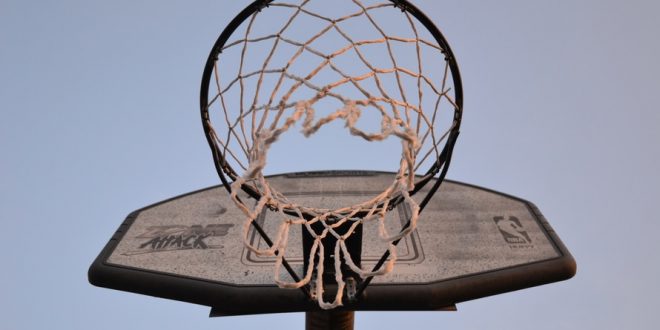 Over 26 million Americans play basketball. Why is this sport so popular? Basketball is a fast-paced ball game where players must have impeccable teamwork, strong bodies, and a clear mindset in order to win. Unfortunately, our community has limited basketball courts, most of them in a dirty and dilapidated condition. The younger population, more than anyone, would greatly benefit from the installation and remodeling of more basketball gyms. In order to help children become both physically, mentally, and socially fit, our community should remodel, restore and create more basketball gyms, complete with roomy locker rooms, new basketball hoops, and bathrooms for the players. Indoor basketball gyms would help children by improving their physical and mental health.

Many children in America are overweight or obese, and most kids are not getting the adequate amount of exercise that is necessary for their bodies. A study in 2013 tells us that seventeen percent (or 12.5 million) American children between ages 2-19 are obese. Obesity, especially during childhood, could lead to an earlier death, serious adult diseases, high blood pressure, and diabetes. Childhood obesity not only causes negative health effects, but it also harms children psychologically. Many scientific experiments proved that obese children were more likely to have low self-esteem, a negative body image, depression, and even commit suicide.

Why has obesity become such a problem? Well, many American communities are getting easier access to high-calorie foods that are cheap and delicious. As long as the food comes quickly and tastes good, children will eat it. These unhealthy meals are cheaper and an easier option than buying fresh fruits and vegetables. Unfortunately, these meals are full of saturated fats, sodium, and sugar; all of which raise blood cholesterol levels, which clog the arteries that bring the flow of blood throughout your body. High cholesterol concentration leads to higher risk of hearts attacks and strokes.

Another reason for child obesity is not enough exercise. Today, our society almost encourages physical inactivity, especially with the rise of technology. A survey conducted in 2011 inform us that three out of four five- to ten-year-old children get less than one hour of physical activity every day, and half of the population of children ages five to ten watch at least two hours of television a day. Many children nowadays would much rather go on the Internet or watch their favorite cartoons than spend the afternoon playing soccer in the park. And yes, I myself have been guilty of this crime.

All kids should be exercising for at least sixty minutes a day in order to maintain a healthy weight. Exercise regulates our body’s blood pressure, blood glucose levels, and improves the health of our blood vessels, which protect us from cardiovascular disease. It also strengthens the heart, which means the heart will be able to deliver oxygen more efficiently. Not only does exercise benefit our physical bodies, but it makes us feel stronger on the inside as well! It is scientifically proven that when we exercise, our brains will release endorphins-chemicals that relieve us of pain and give us the “happy” feeling. Causes for physical inactivity include low motivation, not enough time, and lack of confidence in the ability to be physically active. All of these problems, like obesity and physical inactivity, could be solved if children in our community were able to play on a basketball team.

Basketball is a great cardiovascular workout; players jog, sprint, and jump, which works the heart and lungs. Basketball players burn about five hundred calories for every hour that they play. Other physical benefits include better coordination and stronger, more flexible muscles. Shooting the basketball in the court required players to have perfect hand-eye coordination. In basketball practices, children would learn how to be more coordinated by practicing dribbling the ball steadily while not looking at the ground and securing the ball away from the other team before an opponent reaches the ball, all requiring quick and smooth coordination of hands, eyes, and feet. Without proper hand-eye or eye-body coordination, players would not be able to score points, block the ball from opponents, or play basketball at all. Having better coordination doesn’t just make a basketball player more skilled; good coordination also improves reaction times, and improves productivity (especially in jobs that require typing). Coordination is all about reacting quickly and cleverly without having to think first, thus increasing efficiency in everyday life.

Flexibility is also a key point that children learn when they play basketball. Flexible muscles provide optimal mobility in all joints, which means that children will have better balance when playing a game. If a child’s back muscles are too tight, it prevents him or her from being able to reach straight above their head, resulting in restricting dibbling movement and poor accuracy when making a basket. During basketball training, all the kids will get properly stretched out. Even if some kids start out with stiff-as-a-rock muscles, by stretching during basketball practice, their muscles will become more flexible over a period of time. By providing more basketball courts and refurbishing the old ones, children will be able to play basketball, which trains them physically by encouraging fat-burning exercise, strengthening muscles, improving coordinating, and overall flexibility of the body. It’s so important for kids to be physically active at a young age, and basketball is the perfect sport to get those children up and moving!

Basketball is not just a game of muscles and strength; it is also a game of mental focus and constant observation. A capable basketball player must be able to process information very quickly in order to know what to do next. Basketball is extremely fast-paced; a mere ten seconds could pull a losing team up to the championships. Therefore, a strong mental capability is necessary in order to create a winning team. Players must be able to take a swift look at the court, the opponents, their teammates, and themselves, then decide what course of action to take, all in a matter of seconds. Without a good mental state, players would be unable to make smart decision under the pressure of the game.

It is so very important for kids to develop a healthy mental health, for their mental status tells them if they are going to live a life full of positivity or a life of misery. Children with healthy mental health and a childhood of love, compassion, and trust end up leading productive lifestyles. For million children and adolescents in America suffer from serious mental disorders that cause impairments at home, school, and with other kids. Half of kids with mental illnesses that attend high school will drop out. When children with untreated mental disorders are left to grow up in their mental state, their lives will most likely least to a downward spiral of unemployment, homelessness, and poverty. When kids have an unstable mental state, they are even more likely to commit suicide. Suicide from weak mental health has been a huge issue in America. Studies show that suicide is the third leading cause of death from teenagers, and more teens die from suicide than from cancer, heart disease, birth defects, and influenza.

Luckily, research has proven that poor mental health can be improved if identified and intervened at an early stage. When an adolescent’s mental health is improved, it can prevent delinquent and violent behavior in his or her adult behavior and help the teen avoid years of suffering from terrible trauma. When children have a strong mental capability, they will be able to make quick decision in real-life situations, as shown through the scientific research of Dr. Daniel Gopher of the International Ergonomics Association. Once more basketball courts are built and old ones are remodeled, children will get the chance to improve their mental health.

Not only does basketball provide better reaction timing and strengthens a child’s mental state, but it also boosts self-confidence and self-esteem. Studies show that a child who had high levels of confidence will find life easier and be able to overcome difficult obstacles during adulthood.  Even if someone isn’t the best basketball player, simply making a basketball or aiding a team in victory could be a huge confidence booster to his or her life. Everyone’s heard of the old saying “Where there’s a will, there’s a way,” and this really is true! A player cannot be successful without first thinking of success. Children will gain higher levels of confidence during basketball practice by preparing. People feel timid when they are pressured, and pressure can only be lifted through preparation and practice. Young basketball players will strengthen and condition and be encouraged to think, “I can do it. I can do it” by their coaches, parents, and teachers. Higher confidence doesn’t only benefit the player, but it also benefits the entire team! Much research shows that teams with a confident swagger tend to play more fiercely and intimidate their opponents, giving the braver team the upper hand. Basketball is a game of ups and downs; if the shot misses, the shot misses, end of story. When basketball teams are motivated, the chances of having an “up” will be increased and the severity of the “downs” will be significantly lessened.

Basketball helps raise a child’s self-esteem by giving him or her a reason to be alive. When someone is on a team, he or she is valued, and the feeling of being useful and valuable to some extent is one of the greatest emotions a human can perceive. Having high self-esteem is so important in everything we do. Kids with high levels of self-esteem are more likely to choose for themselves and not follow along with what the crowds think, which can make kids lead a safer and happier life. If our community became a confident and had high self-esteem, it would give others a very positive impression.  By providing the young population of our community with basketball courts, children’s mental health, courage, and self-esteem could be greatly improving, saving many lives and creating a better world for future generation to live in.

Our community’s residents, especially children and adolescents, will benefit greatly from the remodeling and construction of more basketball gyms. Basketball provides a motivating means of exercise to keep kids healthy and strong and build stable mental capabilities. Kids who grow up with these three traits end up being more successful later on in life, so it is so very important for our community to train kids to be healthy physically and mentally. Basketball, for kids, should be life.