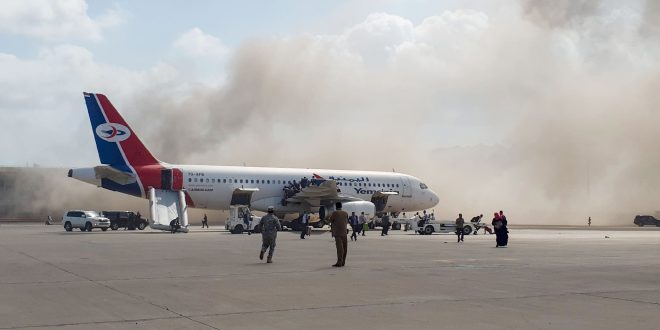 On Wednesday, December 30th, a large explosion struck the airport in the southern Yemeni city of Aden, shortly after the newly formed cabinet arrived there by plane.

According to Yemen’s internationally recognized government, Iran-backed Houthi rebels were responsible for the attack, and fired four ballistic missiles at the airport, though the rebel officials have yet to comment or claim responsibility.

According to eyewitness reports, two explosions were later heard as the Yemeni cabinet members were being transported to a palace in the city, suggesting a drone attack. Saudi-led coalition forces later shot down a bomb-laden drone that was attempting to target the palace.

Many nations and international organizations condemned the attack. Farhan Haq, Deputy Spokesperson for U.N. Secretary-General Antonio Guterres, said the “Secretary-General condemns the deplorable attack on Aden airport shortly after the arrival of the newly formed Yemeni cabinet, which killed and wounded dozens of people.”

Christopher Henzel, U.S. Ambassador, said the U.S. condemned the attacks in Aden. “We stand with the Yemeni people as they strive for peace, and we support the new Yemeni Government as it works towards a better future for all Yemenis.” Egypt, Jordan, and other Arab and Western countries also condemned the attack.

The Yemeni ministers were returning to Aden from the Saudi capital Riyadh, where they have been working from self-imposed exile due to the Yemeni civil war. They were sworn in the previous week as part of a reshuffle following a deal with the UAE-backed separatists, nominal allies of the Yemeni government.

In a video message posted on his Twitter account later, Yemeni prime minister Saeed said his government was in Aden “to stay.” The city has been the seat of Hadi’s government since Houthi rebels overran the capital Sanaa in 2014.

The civil war in Yemen, which has been going on since 2014, has already killed over 112,000 people and caused a major international humanitarian crisis.