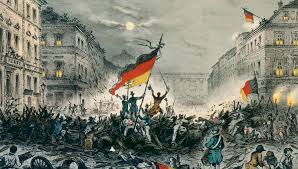 Often, revolutions under oppressive governments are viewed as necessary or beneficial. When those in power begin abusing their power and using it to benefit themselves at the expense of the common citizen, unrest and dissatisfaction increases within the population and people begin pondering revolution. Prominent political groups begin forming and searching for ways to reform the government, sometimes choosing to overthrow the current authorities and reinstate a more democratic government.

How did the current government become corrupted in the first place anyways? When leaders are granted a position of power, they are effectively given the freedom to control the nation’s subjects, especially in dictatorship or authoritarian regimes. In these cases, human selfishness tempts those with power to wield their influence in their favor, often simultaneously hurting those they were supposed to represent. At the point where corruption has cemented itself in the government, change and reform is necessary to either fix or replace the authority.

This is not an uncommon occurrence in the world today. Often, when revolutions occur to replace repressive governments, the next government becomes oppressive as well, spurring more and more revolutions. It almost becomes a vicious cycle, with the new leaders suddenly transforming into those who they vowed to replace. After all, it isn’t necessarily the person that is corrupted: it’s the access to power that corrupts, making revolutions precarious and uncertain.

The trend is obvious even in parallel scenarios: those wielding power or influence often taking to marginalizing or harming others, forcing them to retaliate and attempt to regain power. Once this influence is obtained however, the vicious cycle repeats, with the originally marginalized party turning to violence or cruelty. For instance, in the military standoff between Saudi Arabia and the Houthis in Yemen, having the upper hand is crucial. The Houthis claim that Saudi Arabia is taking the land that is rightfully theirs, and yet, if Saudi Arabia withdraws, the Houthis are bound to advance further into Saudi territory. In the book Cry, the Beloved Country by Alan Paton, black and white South Africans are segregated and discrimination is the norm. The character Msimangu urges society to turn to love and compassion to solve their differences, rather than resort to the hate the whites have expressed. He then reveals his biggest fear: that when the whites have turned to loving, the blacks will have turned to hating. He is afraid that when the tables turn, the same marginalization will happen but with the sides flipped.

When viewing a situation with one disadvantaged party and another in power, it is clearly crucial to restore equality. What’s more important is to prevent a seesaw scenario in which the rise of one side corresponds with a fall in the other, culminating into a vicious cycle in which violence and hate becomes endless.