Home / Sports / Who Should Win the NBA MVP award. 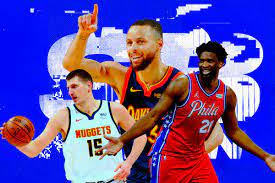 Who Should Win the NBA MVP award.

As the regular season has come to an end, the NBA has officially announced that Nikola Jokic, Joel Embiid and Stephen Curry are the three finalists for the NBA MVP award.

Neither Jokic nor Embiid have won the prize before, while Curry could become member of a special group consisting of Magic Johnson, Larry Bird and Moses Malone, all of whom have won the accolade three times.

So, which player deserves it more?

The case for Curry

Curry has been extraordinary this season, averaging 32 points per game. The Golden State Warriors guard has led his team into the play-in tournament, where they lost to Los Angeles Lakers, but will have another chance to make the playoffs if they beat the Memphis Grizzlies.

“It’s always been a level of respect that’s even beyond the game of basketball, the way I feel for Steph,” LeBron James said earlier this week.

“If you’re looking for MVP, if Steph is not on Golden State’s team, what are we looking at? We get caught up in the record sometimes instead of just saying, ‘who had the best season that year?’

“And Steph has had, in my opinion, the best season all year. Obviously, I don’t think Steph is going to get [the MVP]. … That’s another conversation. But in my eyes, he’s played the best basketball all year round.”

In the Eastern Conference, Embiid averaged 28.5 points, 10.6 rebounds and 1.4 blocks per game for the Philadelphia 76ers, who top that conference’s standings table. Yet he did miss time through injury.

According to Portland Trail Blazers franchise player Damian Lillard, however, Jokic deserves this award more than Embiid for his consistency this season.

“[Jokic] has been dominating from start to finish,” said Lillard.

The MVP’s are decided by newsbroadcasters across the USA. Though each person has incredible stats to prove they are worthy, there are a lot of other factors to take into consideration. Who do you think should win?