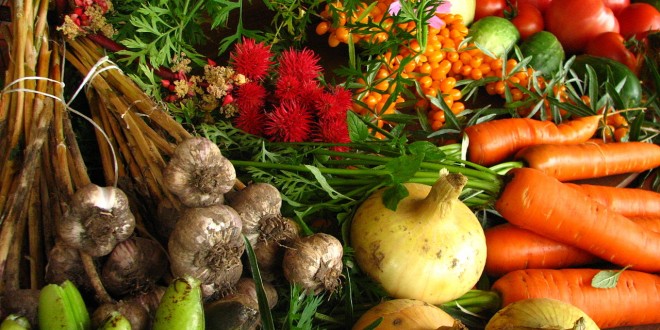 Besides the obvious benefits of fresh fruits and vegetables to your diet, there are plenty of reasons people turn to veganism or vegetarianism, including weight loss, health issues, and animal rights. Still others are guided by their religious or personal views. In today’s society, it’s never been easier to convert to veganism or vegetarianism, with the skyrocketing number of delicious vegetarian and vegan meals in restaurants.

When looked at with a careful eye, however, are these diets really more healthy for the average human, and to what extent do they have an impact on the animals and environment?

Vegans and vegetarians both do claim a large list of benefits which stem from their diets. It’s commonly asserted that vegans and vegetarians have improved heart health, increased energy, and younger looking skin compared to those on the average american diet. A possible explanation for this is that meat and cheese are both high in saturated fat, which is bad for your heart. This fat raises blood LDL cholesterol levels, which causes harm to your arteries, putting you at a higher risk of a stroke or heart attack. Vegetarians, however, tend to eat more heart-healthy, less-fatty, fiber-filled foods such as lentils and beans, which both reduce “bad” cholesterol.

One of the main concerns surrounding a vegan or vegetarian diet is that of protein deficiencies. In reality, vegetarians can get protein from many other sources, such as soy foods like tofu and tempeh, beans and lentils, nuts, some whole grains like quinoa, and greens like spinach and kale. Another issue for the vegan/vegetarian community is that of iron, since iron from non-meat sources is harder to absorb than iron from meat. However, vitamin C helps the body to absorb iron, and since vitamin C is relatively easy to obtain, supplementing a vegan diet with it helps mitigate this problem.

In addition, not eating meat benefits both animals and the environment, and is a sustainable method of feeding the world. There’s far more involved than what meets the eye to obtaining and processing farm animals for sale at the supermarket, from the crops and water required to feed the animals, to the transport and countless other processes. In fact, the copious amount of feed such as corn, beans, and grain required for the production of meat is a significant contributor to deforestation, habitat loss and species extinction. As an example, the equivalent of 5.6 million acres of land in Brazil is used to grow soya beans to feed the animals in Europe. This makes no sense, and instead contributes to malnutrition, since impoverished people now have an incentive to grow cash crops instead of food for themselves. It doesn’t stop there; according to the US Environmental Protection Agency (EPA), chemical and animal waste runoff from factory farms is responsible for more than 173,000 miles of polluted rivers and streams.

There’s one more point that most vegans and vegetarians benefit from, and that’s the cost of a vegan lifestyle. Studies have shown that meat is approximately 10% of Americans’ food spending. On the contrary, eating vegetables, grains and fruits in place of the 200 pounds of meat each nonvegetarian consumes yearly would cut individual food bills by about $4,000 a year.

Although veganism and vegetarianism do have many benefits, there are also quite a few drawbacks to this lifestyle, such as how there are some nutrients which are found only in animals. A prime example of this would be Vitamin B12, an important vitamin which helps in the formation of blood and the function of the brain, making it critical for life.  Researchers from Japan and Italy reported in the Journal of Agricultural Food Chemistry that being deficient in B12 can lead to nerve and brain damage, which could eventually become irreversible. However, the trouble is that it is produced only by a special kind of bacteria that lives in the digestive tracts of animals, though this bacteria has also been shown to be able to live on or near some types of plants. Unfortunately, the human body is actually unable to use the plant-based form of B12, and as a result, B12 deficiency is very common in vegans, one study showing that 92% of vegans are deficient in this critical nutrient.

Another nutritional cost to living a nonmeat lifestyle is the lack of animal protein, which contains all the essential amino acids in the right ratios. Amino acids are important for muscle mass and bone health, as well as other functions of the body. Not getting any animal protein can have negative effects on body composition. Other nutrients which vegans and vegetarians have been found to be either deficient in or at high risk of being deficient in are creatine, carnosine, and Docosahexaenoic Acid (DHA).

Finally, even though there have been studies showing veganism linked to healthier people with lower mortality, such studies are observational studies which only demonstrate correlation, not causation. There could be a multitude of confounding variables, such as how vegan people are generally more health conscious than the regular American, which makes them less likely to binge on junk foods and smoke. In addition, vegan diets also recommend that people give up added sugar, refined carbohydrates, vegetable oils and trans fats. This is probably a big part of the reason why vegans are often found to have health benefits.

Either way, there is not evidence that unprocessed meat, eggs, or animal-derived nutrients like saturated fat and cholesterol cause harm to the human body. The real issue is with overprocessed, “bad” cholesterol filled, junk foods that the average American mindlessly consumes.

There are plenty of arguments both for and against veganism and vegetarianism, but as with everything, no one diet is perfect for everyone. The optimal diet for any one person depends on a lot of factors, such as age, gender, activity levels, current metabolic health, food culture, and personal preference. And if someone chooses to go vegan or vegetarian, they might very well achieve what they set out to achieve in terms of health, animal rights, and environmental preservation, as long as they take the proper supplements for their diets and keep a mindful eye on any possible vitamin deficiencies that they may develop.

Previous LIGHTSPEED
Next Why Is It So Hot?!