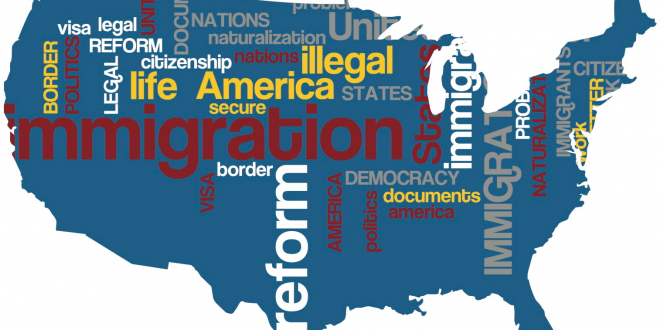 On August 4, 2017, President Donald Trump joined Republican Senate David Perdue of Georgia and Tom Cotton of Arkansas to promote an immigration bill that would dramatically reduce legal immigration and shift the nation toward a system that prioritizes merit and skills over family ties.

This proposed bill would replace the current process for obtaining permanent residency by creating a skills-based point system for employment visas. It would favor those who can speak English, have high-paying job offers, can financially support themselves, and offer skills that would contribute to the US economy. This bill would eliminate the preference for US residents’ extended and adult family members, while maintaining priority for their spouses and minor children. This bill would also aim to cut the number of refugees in half and eliminate a program that provides visas to people from countries with low rates of immigration. Overall, immigration is projected to be reduced 41 to 50 percent from the legislation’s first year to its tenth year.

This bill was the latest example of President Trump championing an issue that animated the core voters of his 2016 campaign, following decisions to pull out of the Paris climate treaty and ban transgender people from the military. During his 2016 campaign, the president argued that immigrants compete with Americans for much-needed jobs and drive wages down. The White House stated that only 1 in 15 immigrants come to the US due to their skills, and that the current system fails to prioritize highly skilled immigrants.

Most economists dispute the president’s argument, noting that immigration in recent decades does not appear to have hurt wages in the long run. Increased immigration is also associated with faster economic growth, due to the country adding to its workforce, so restricting the number of immigrants could slow the economy’s potential to grow.

It appears that this bill has gained little traction in the Senate, which has also largely ignored a previous version of the bill, with no other lawmaker signing as a co-sponsor. GOP leaders have showed no inclination to vote on immigration this year, and Democrats quickly dismissed it.

Some immigrant advocates have criticized the proposal, saying that slashing legal immigration would hurt industries like agriculture and harm the economy. A group backed by former New York City Mayor Michael Bloomberg stated that the immigration system is broken, but the response should be to modernize it, not take a sledgehammer to it.

Roger is a junior at Carlmont High School in Belmont, California. Roger serves as an officer of Help Everyone and Remember to Share (HEARTS) non-profit. Roger founded the first California Business Professionals Association (BPA) club at his high school and is active in other STEM related clubs. Outside of his busy school schedule, Roger practices karate, plays saxophone, reads, and volunteers for several worthy social causes in the US and China. Roger is extremely honored to serve as the News Column editor for the Rising Star Magazine.
Previous Organizing Summer Homework
Next Why You Should Exercise