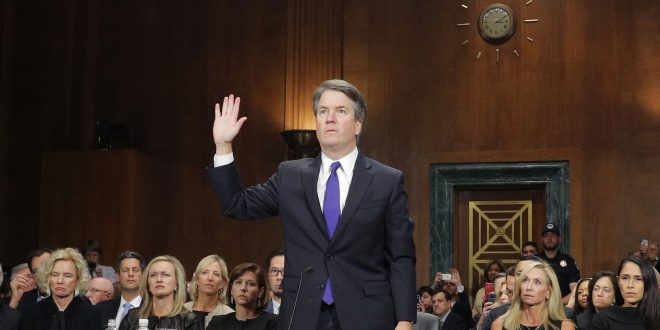 The confirmation of Supreme Court judge Brett Kavanaugh has blown up in the news in light of allegations of sexual misconduct by Kavanaugh in his high school years. As someone who has been consistently conservative, Kavanaugh has gained the backing of most Republicans in office, while unsurprisingly opposed by the Democrats. For a period of time, it seemed that his confirmation was imminent, with Republicans controlling Congress. But in a dramatic turn of events, a psychology professor who knew Kavanaugh from high school has come forward with allegations that the judge assaulted her at a party her sophomore year.

On September 27th, both Kavanaugh and Ford testified under oath before the Senate. Each gave a compelling testimony, with Kavanaugh denying the claims and taking blows at the Dems for using this as an excuse to delay nomination, and Ford providing an emotional recount of what happened a summer night in her sophomore year. Afterwards, questioning began, with Democratic senators cross examining Kavanaugh about the details of his account, and Republicans slamming Democrats on their thirst for power and willingness to use Ford as a tool to receive it. Additionally, Democrats called for a FBI investigation of the case, explaining that the allegations were new and crucial information that needed to be looked into. Republicans pushed back accordingly by saying that FBI investigations have historically been ineffective and inconclusive.

But more specifically, senator Jeff Flake has been instrumental in the progression of the nomination. Faced by mounting pressure to call for a FBI investigation, Flake has set an ultimatum: if there is no FBI investigation, he will not vote to confirm Kavanaugh. This bold action forced Republicans to call for an investigation, as every single vote is crucial for the nomination. However, there’s more to the situation that begs important questions about how our politics and the constant power struggle between parties has affected justice in the US government. Flake is retiring from the Senate next year, and will not be looking towards reelection. He states, however, that if he had been running for reelection, he would not call for the FBI investigation. This is a crystal clear example of how the necessity to garner votes forces politicians to take specific actions contrasting to those that he might think are correct. For example, if Flake had been looking for reelection, he would not endorse the investigation simply because doing so would lose him votes, even though he believes an investigation is best for justice. But even at this point, it’s unclear whether Flake should or should not take this action. Is the senator’s responsibility to take actions based on what he believes is just, or based on his voter’s interests? At the point where his voters may be motivated more by the power politics than actual substance, is it still necessary to represent them completely?

In a more general perspective, the Kavanaugh confirmation has brought out the defining features of American politics. The divisiveness of our Congress and country in general has played to the desires of people to take sides and prove the “other” to be wrong. At that point, people are automatically “assigned” to a side based on their political beliefs, or which party they associate with. They are forced and usually will defend that side, regardless of the objective facts or circumstances. People are no longer willing to see the other side, because they take that as a “loss” to their identity and their party. Instead, political conflicts are now seen as a game where parties are assigned sides, rather than a common effort to pass the best policies and make the best decisions for America as a whole. To actually improve the country that we all live in and that we all have in common, we should instead learn to accept our differences and work together towards greater progress.