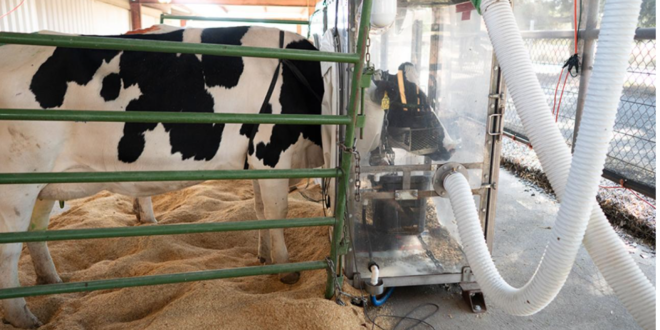 Did you know that cows are the number one highest agricultural carbon emitter in the world? Not transport and cars, deforestation, waste, and power plants, but cows.

In a recent study at UC Davis, researchers put cows’ heads in plastic incubators with tubes attached to them to measure the total amount of methane a cow can release. Their burps harm our environment by producing around 14.5% of global greenhouse gasses yearly, therefore being a huge factor in global warming. But in a study at UC Davis, professor Ermias Kebreab discovered that 89% of the methane from cows comes from their gut and exits their body through the nose or mouth, so changing their diet to something that is easier to digest, that might just be the clue. His lab found out that putting 3 ounces of seaweed daily into the cow’s diet reduces the number of carbon emissions by 82%, which is a good amount considering the fact that one cow can produce 220 pounds of methane each year!

Reducing the amount of beef we intake to once in a while can also reduce global warming by ⅕ of the carbon emissions. This would make cattle the world’s third-largest carbon emitter. When we cut down our beef intake by 50%, according to the Food and Agriculture Organization of the United Nations, more than 43 gigatons of carbon emissions can be avoided from dietary change alone.

How does reducing the amount of beef we intake reduce carbon emissions? Cows burp methane when they eat and that methane gets released into the atmosphere; which then would warm up our planet by a drastic amount. If we reduce the amount of beef we intake, then there would also be less demand for meat and less methane released. In addition, although methane is shorter-lived than carbon dioxide, it is still 28 times more dangerous than carbon dioxide and that is why we should work to reduce it!
In conclusion, we need people like you to reduce carbon emissions by spreading awareness and reducing the amount of beef you eat!