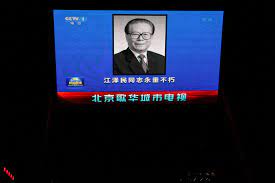 On Wednesday, November 30, former Chinese president Jiang Zemin, who led the country for a decade of rapid economic growth after the Tiananmen crackdown, died at the age of 96. A wave of nostalgia has erupted across the country for the more liberal time period he governed.

Jiang died in his home city of Shanghai just after noon on Wednesday from complications due to his leukemia that caused multiple organ failure, according to Xinhua news agency, which published a letter to the Chinese people by the ruling Communist Party,parliament, Cabinet and the military.

“Comrade Jiang Zemin’s death is an incalculable loss to our Party and our military and our people of all ethnic groups,” the letter read, in an announcement full of “profound grief”.

Jiang’s death comes at a volatile period in China, where authorities are dealing with rare widespread street protests among residents fed up with heavy-handed COVID-19 curbs nearly three years into the pandemic.

The zero-COVID policy is a signature of President Xi Jinping, who recently secured a third leadership term, cementing his place as China’s most powerful leader since Mao Zedong, and steering China in an increasingly authoritarian direction since replacing Jiang’s immediate successor Hu Jintao.

China is also suffering from an economic downturn aggravated by the zero-COVID policy.

Though Jiang put down student protests in Shanghai that were part of the waves of pro-democracy demonstrations culminating in the bloody crackdown at Tiananmen Square, some Chinese expressed their nostalgia for Jiang’s era of optimism and greater economic liberalization and political freedom.

Though he had a fierce temper, Jiang was also characterized with his casual and quirky attitude, sometimes bursting into song, reciting poems or playing musical instruments, contrasted with his successors.

Many Chinese netizens have described the death of Jiang, who remained influential after finally retiring from politics in 2004, as the end of an era.

Previous The Dangers of Cows
Next Japanese Honeysuckles