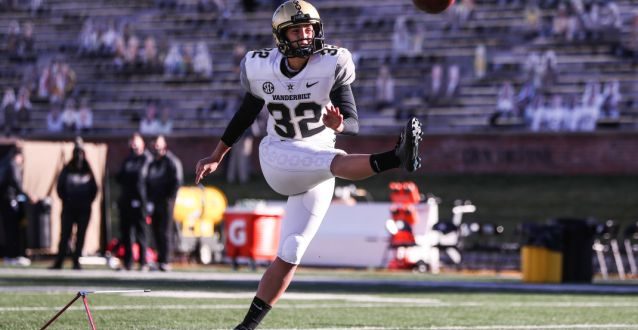 COLUMBIA, MO - NOVEMBER 28: Sarah Fuller #32 of the Vanderbilt Commodores warms up prior to the game against the Missouri Tigers at Farout Field on November 28, 2020 in Columbia, Missouri. (Photo by Missouri Athletics/Collegiate Images/Getty Images)

Sarah Fuller has already made a name for herself in college sports as a goalkeeper for Vanderbilt, but how she gained national recognition is another story. It all began when her soccer coach decided to break up the monotony of another morning practice by asking her to kick footballs through the field goals, moving back five yards every time she made one. As she was kicking, she progressed further and further away and even sent the ball soaring through the sheets from 45 yards away, a difficult task even for professional NFL kickers. Six days later, after having been seen doing this by the Vanderbilt football coach, she put down her soccer kit and picked up a football jersey. That was the day that she spoke to the press as Vanderbilt’s and the Power Five’s very first female football player in history.

She immediately became a star as she opened the second half of the very next game with a well placed squib kick, which impressed her teammates, and even more, her coach, as he said that he was “very proud of what she had accomplished and knew she would continue to impress.” The very next game, she broke a new title as the first woman to score an extra point for the Commodores against Tennessee. That week, she was awarded special team player of the week, and player of the month.

Fame however, never comes without its downsides. The people who weren’t supporting her, were bashing her through social media. Derogatory comments saying that she was not good enough or that she did not deserve the recognition came like a wave, but Sarah Fuller kept that same confidence that she had on the field. She humorously compared all of her haters to Uncle Rico from Napoleon Dynamite. She added a gif of the character with his signature line “How much you wanna bet I could throw football over them mountains.” A fan even wrote, “They are just jealous because you did something they could never do.”

Her message resonates greatly with other young athletes who are seeking to make a name for themselves. People will always want to diminish your achievements, but take one out of the book of Sarah Fuller by breaking boundaries despite what other people say about you.