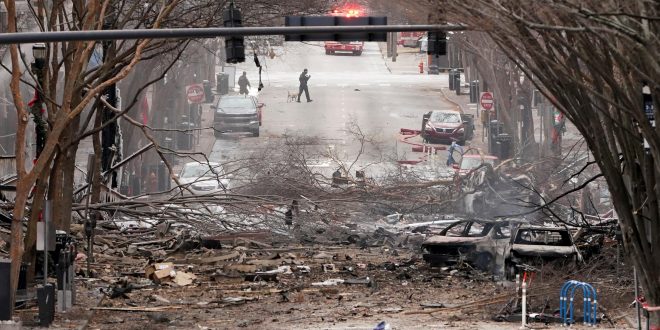 On early Christmas morning, Nashville residents were startled by gunshots that rang out in a downtown community. Shortly after, residents looked out their windows to see an old white recreational vehicle parked on the street. A woman’s voice started emanating from the vehicle, warning residents to evacuate. Fifteen minutes later, the RV exploded.

The explosion shattered windows and sent flaming debris flying through the air, causing tremendous infrastructure damage. Three civilians were injured by the blast, and fortunately, there were no fatalities.

Many details about the explosion remain mysterious, but Nashville Mayor John Cooper said on Friday that the explosion was caused by a “deliberate bomb”.

The unusual warning that was broadcast from the RV likely saved many lives, with police officers taking the warning seriously and ushering civilians to safety before the bomb went off. The gunshots that went off near the neighborhood also woke many of the residents up, allowing them to hear the warning from the RV and vacate the community in time.

Investigators have found tissue near the blast site, and it will be examined to ascertain whether it is human tissue to find more clues about the explosion.

Metro Nashville Police Department officers were responding to reports of gunshots in the area when they saw the RV parked in front of an AT&T transmission building at 166 2nd Avenue North. When they heard the warning message, they started moving people away from the area. The blast wave knocked down one officer and caused hearing loss in another, but none suffered serious injuries. The three civilians that were injured in the blast are hospitalized and are in stable condition.

Police investigators were not able to link the incident to any probable causes, and FBI and DOJ investigators are being sent to the scene to assist in the investigation.

Previous Make the Most of this Holiday Season
Next Sarah Fuller