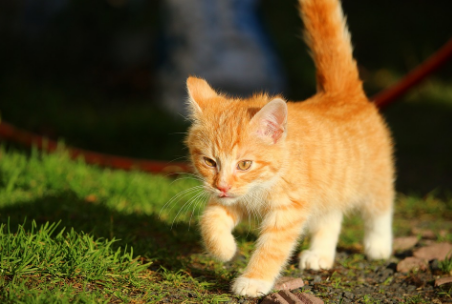 Cats live everywhere in a city: in one’s warm room or in the wild streets. However, cats live a quite special life in our school, as they belong to nobody, but they are inhabitants there.

One cat on our campus is a ginger-colored one. It has the most common look of cats: not long but a little messy hair, eyes shining like lamps in the front, and a tail whipping behind. Its home is believed to be under the bushes under a big tree, a place well-designed for its nap at noon, as we never see it at that time. At other times of the day, it can be seen sitting on the long chair of a corridor, or hurrying across the corridor, jumping over the chair. Still, as there are so many noisy students, the cat does not appear in public very often.

Once, I got a very lucky chance. It was the week that was our class’ turn to “guard” the school when other students were working out, and I needed to stay in front of the school clinic, which was very near to the bushes the cat lives in. As I was wandering boringly, the cat appeared. It looked very alert as it emerged from the bushes. Suddenly, a smaller cat—- with the exact same look, but only smaller—-jumped out besides it, and went to a bowl, in which food was placed. The bigger cat was watching its kitten carefully as it enjoyed its breakfast.

I became quite curious about whom the cats were fed by. Apparently, the teachers were the main benefactors, as the food bowl was theirs. Some students fed them too, because I once saw a student putting some cat food into the bowl, while the big ginger cat was eating the food just in front of the student. It is quite clear that these “inhabitants” do not fear people at all. After all, they live there all the time, while most of us spend our nights at home. These furry creatures are the furry landlords on campus.