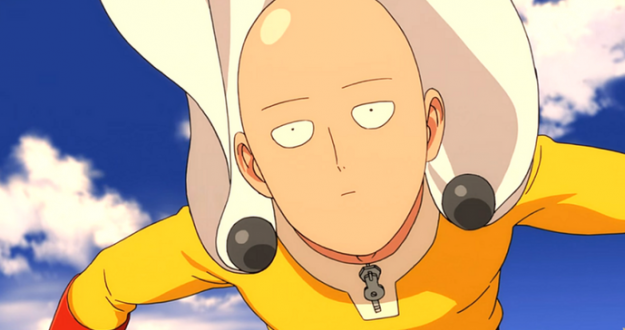 In 2009, a character was created that would forever change the way we think of superheroes. This character was One-Punch Man. The creator, a man simply known as On, created One-Punch Man originally, as a webcomic. Part superhero comic, part giant-monster comic, and part satire of both genres; in 2015, the webcomic was turned into an anime. The show follows a superhero named Saitama whose most notable power is his ability to kill anything with a single punch. However, while the premise seems simple -even stupid -it’s astounding. In fact, One-Punch Man is one of the greatest shows ever animated: its action animation is of high quality, it examines postmodern existence, and it runs the emotional spectrum from laughter to outright tears.

While One-Punch Man’s regular art style is not particularly stunning, its action

sequences are among the most stylish and flashy of anything ever animated. The protagonist, Saitama, is simple in design. He has no hair on his round, bulbous head. His eyes are just two enclosed circles with dots. His mouth is a straight line. He is a bit more than a child’s drawing of a stick figure. However, this simple design allows the action sequences to seem wilder and more expressive. However, in these action sequences, Saitama is drawn in more detail than when he is standing still.The reason why this show does this is because Saitama only feels alive when he is being challenged. Sadly, because of his power, he is often disappointed. His simple design reflects this constant state of boredom and disappointment.

Saitama is constantly living in a postmodern existential crisis. He is so powerful as a superhero that nothing challenges him anymore. While Saitama is restless and bored with his own existence, viewers might find the show something of an emotional rollercoaster.

One-Punch Man has outrageous action sequences. Saitama’s silly and simple design reinforces the overarching theme of post-modern boredom, and the show manages to turn this profound existential crisis into something emotional and fascinating. Because of these reasons, One-Punch Man is not just one of the greatest shows ever animated-it is one of the most original.