Home / Opinion / Why is No One Talking About Aleppo? 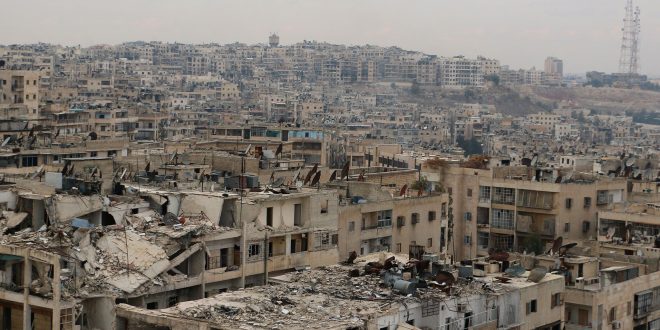 Why is No One Talking About Aleppo?

Videos have been circulating on Facebook of citizens in Aleppo filming their last goodbyes to a city that used to be the industrial center of Syria, now reduced to a pile of rubble, cement, and grave uncertainty. Yet, Aleppo is nowhere to be found on the Trending Topics in Google News. Donald Trump, Berlin, and even the New York Jets are higher on America’s news consciousness. There are reports of the last hospital standing in Aleppo being bombed, of children being slowly suffocated by chlorine gas, of 20 women committing suicide to escape the inevitable carnage and rape of the soldiers of the Syrian regime.

A quick backstory: Aleppo used to be the booming capital of Syria, until it got embroiled in a bitter battle between the Syrian Assad regime and various rebel forces in Eastern Aleppo. The Syrian Assad regime, notable for being ultra-nationalist, loyalist, and using methods of mass destruction like bulldozing citizens and ballistic missiles, has been propped up by Russia and Iran for means of political convenience. The rebel forces, while in theory are backed by the U.S., range from moderate political agendas to jihadist tendencies (i.e the Islamic State). In short, the issues surrounding Syria are extremely complicated and shrouded in murky propaganda.

No matter the sides, though, we are witnessing a massacre in 2016.

This is happening. This is real. And yet even in the age of complete transparency, in an era where every source of news is accessible with the simplest click, in the age of technology, we are choosing to deliberately ignore mass genocide. 400,000 bodies.

So how do we promote change on the opposite side of the globe? Understandably, many people have an opinion on social media sites and comments on Facebook on these tragedies can garner over 500 likes typically. However, commenting and retweeting a post is simply not enough. If you are sincerely concerned with the state of affairs in Aleppo, donate to organizations such as Save the Children or Doctors Without Borders to follow the lead of notable public figures like Cristiano Ronaldo to aid Syrian refugees and fund much needed medical care in Syria. Active political engagement is crucial, so representatives of local government must be contacted.

The public should be constantly reminded of the things easiest to ignore. Grassroots organizations are the key to preserving humanity.