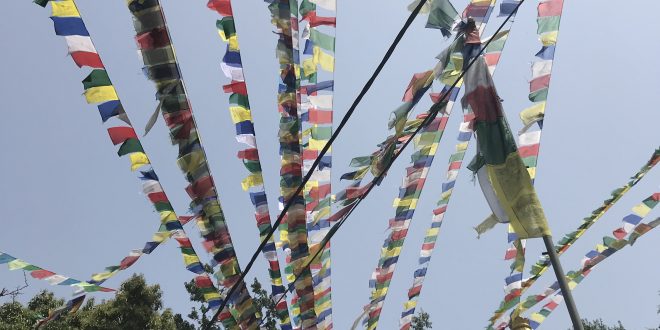 This summer, I returned to Kathmandu, Nepal. We went to the Shree Gamvir Samudra Setu Secondary School to help paint their classrooms and amp up their library. Since last year I helped mainly with painting the walls a solid color, this year I decided to try something new by drawing and painting a mural with some of my friends. We decided to base our mural on a picture from the book The Fantastic Flying Books of Mr. Morris Lessmore by William Joyce. Our mural has a girl in it, holding onto a bunch of strings that are attached to flying books. We gave the girl a huge red dress with a bunch of letters on it to further play off of the “library” theme. On some of the flying books that the girl held, we wrote book titles in English, Chinese, and Nepalese. We thought it would be nice to subtling include our own cultures in our mural. It felt really rewarding to create something beautiful in their library, knowing that it could potentially bring happiness to a school kid.

On the last day, some of the school kids came up to look at the finished murals, and they started pointing and smiling at our mural. That made me feel like all of our hard work paid off. We also donated money to get doors and windows installed in their library. I remember thinking how dangerous it was that there was just an open “hole” in their wall. Someone could so easily fall out of what was supposed to be their window. After the glass panes and doors were installed, it was like I was in a whole other room. Doors and windows are something so small that we so often take them for granted. And yet, these kids had to have money donated to them in order to get doors and windows. It definitely put things in a new light for me. On one of the days in Nepal, we went to an animal shelter, SPCA Nepal.

Although we were originally going to help clean out the cages, we ended up spending the majority of the time just hanging out with the puppies. It was nice to see that someone in Nepal was working to help the stray dog situation. However, I was pretty surprised at the small size of the shelter. There are a lot of stray and injured dogs in Nepal. Just on our street alone, I could probably run into over five stray dogs. In my opinion, all of those dogs deserve to be saved and cared for. But, looking at the size of the shelter, they probably wouldn’t have enough room for that many dogs. I definitely think they should look into expanding their campus.

I’ve been thinking a lot about why I decided to return to Nepal again. And, I think it has a lot to do with the people there. The school children are always so loving, welcoming, and happy. It makes you want to do something to better their lives. And, it helps to have Puran there every year. Puran is truly a good person, and he is so willing to help others. It’s crazy how much a little paint can help a space look so much more lively. And, it’s crazy how much a new building can change a child’s life. This time in Nepal, I was able to see a lot of improvements in their infrastructure. That made me really happy, because I know that they are working to improve their conditions. In the future, I hope I get the chance to return to Nepal and help transform another school.